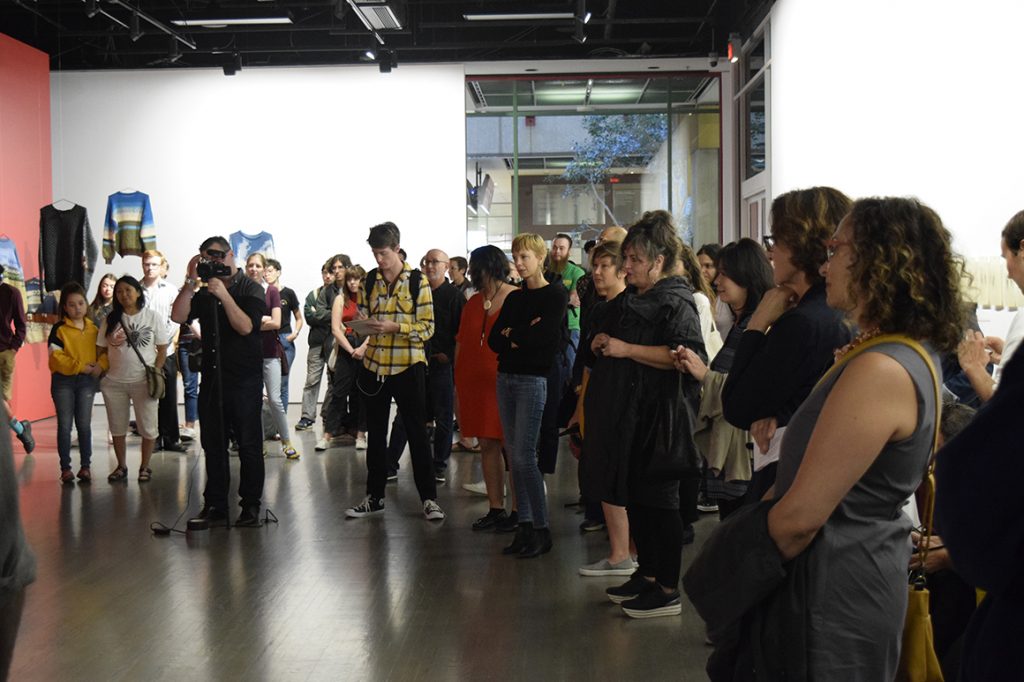 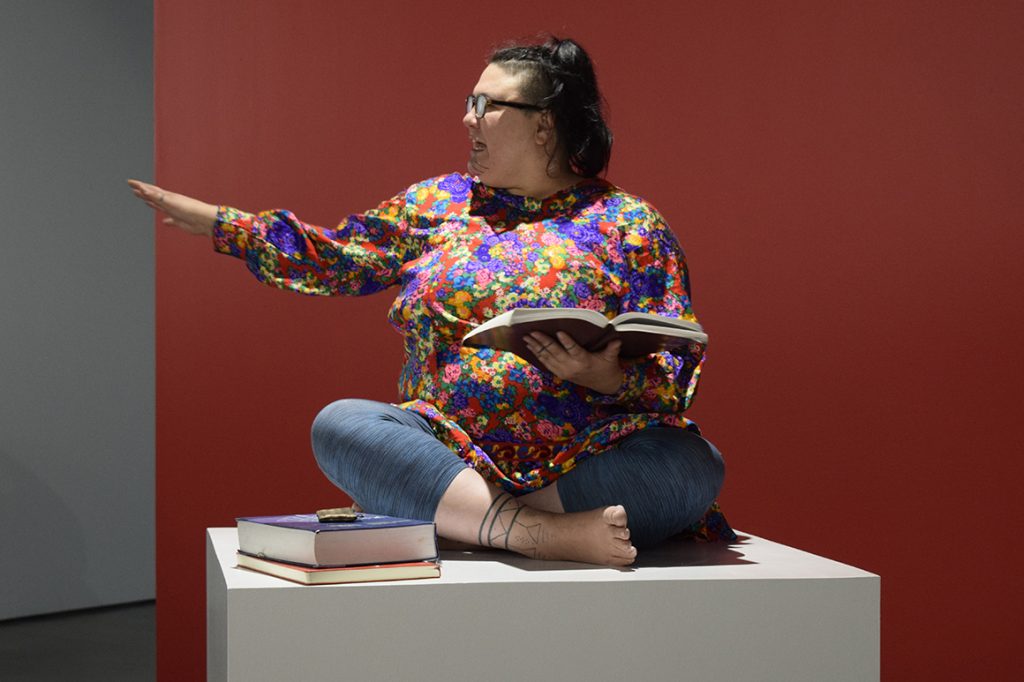 In Alaskan arctic communities the Iñupiaq word siku names both ice and methamphetamine. For her two-part performance Warden addressed both senses of the word, considering the social and personal consequences of colonization and means of resistance through language revitalization.

Free admission
At the Gallery 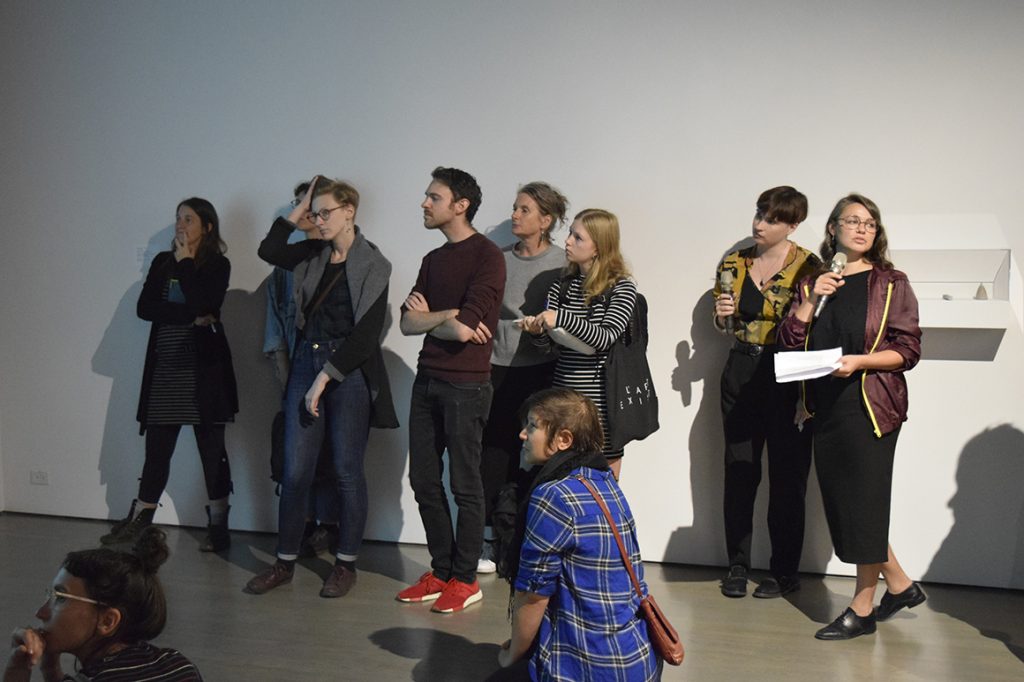 Walking through the exhibition, curators Amy Prouty and Charissa von Harringa, and artists asinnajaq, Kablusiak, Taqralik Partridge, Inuuteq Storch, and Allison Akootchook Warden discussed the works presented, the artists’ practice, and the questions and issues raised in Among All These Tundras. 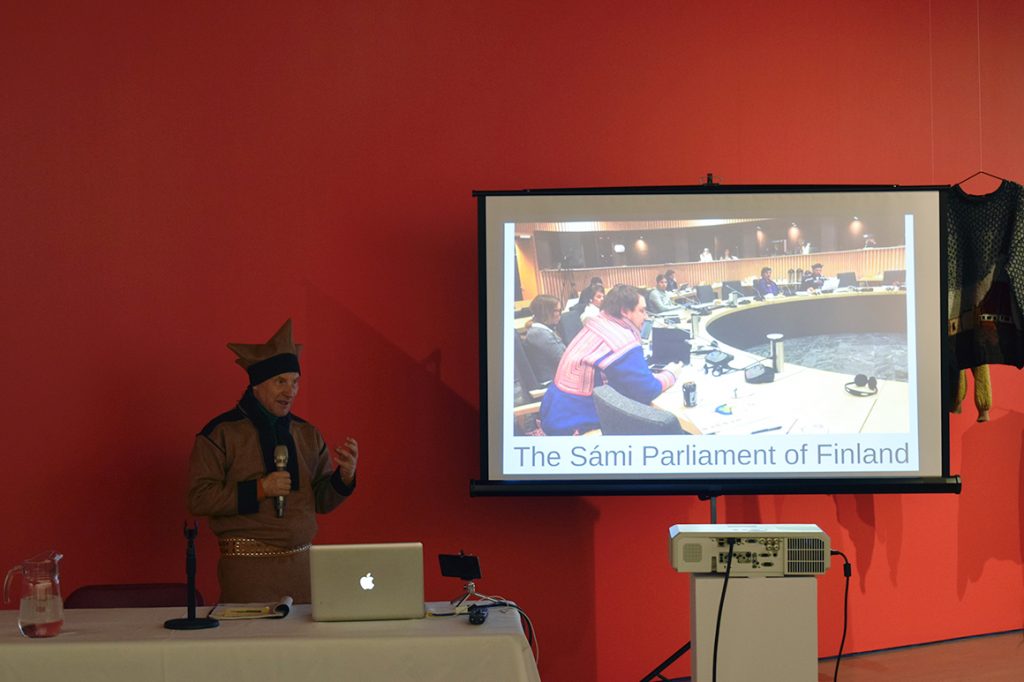 The Encounter Between Nation States and Indigenous Peoples, Ánde Somby (Associate Professor in the Faculty of Law, University of Tromsø)

How many legal shapes can the encounter between a nation state and an Indigenous people take? This presentation traced the various approaches taken when a nation state has established its presence in a territory already populated. Does the state simply use the people already living there as resources along with the riches that the territories offer? For example, as slaves? Or do they just cleanse the territories of these people? Do they criminalize the people or tolerate their presence until worthier interests emerge? Or are the people educated and integrated? Does the state consult them? Give them veto power? Or even the right to propose initiatives themselves? We followed this line of inquiry with examples from history as well as from today’s reality to analyze the encounter between nation states and Indigenous peoples. 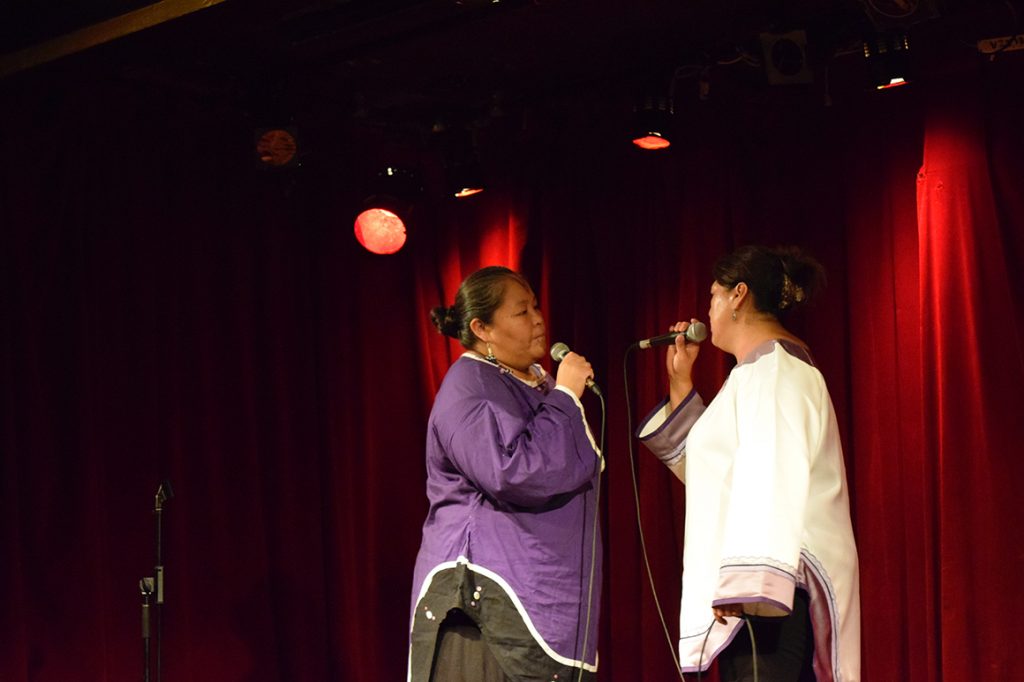 The animals inside the man and the man outside the animals

Are we simply humans? Or are there animals inside of us? Plants? Landscapes?

This is the question that underlined Ánde Somby’s performance, during which he “yoik-impersonated” birds, insects and animals. Inspired by the pre-Christian Sámi concept of transformation—that a human could change into an animal and back again—Somby considers our current moment when many birds and animals’ lives are on the line. How would they comment, for example, on pollution? 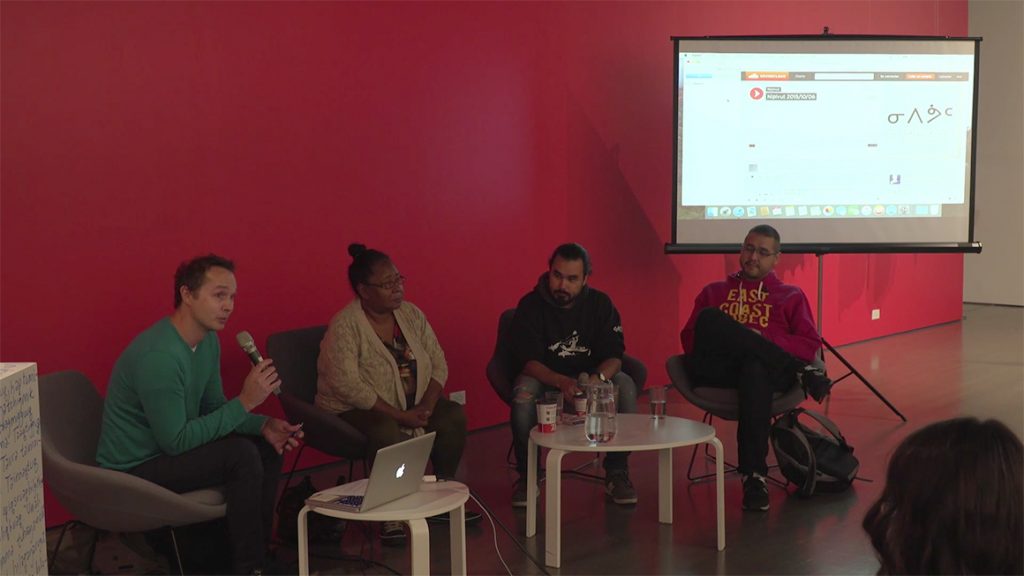 Gabriel Uqaituk and Annie Pisuktie of Nipivut, Montreal’s first Inuktitut radio show, and Stephen Puskas discussed Inuit-led radio as a way of understanding urban Inuit experience and identity. Meaning ‘Our voice’ in Inuktitut, Nipivut has been on-air since 2015 and is the only campus community radio show in the country broadcast predominately in Inuktitut. Attentive to the Truth and Reconciliation Commission’s calls (no. 84–86) for more Indigenous language programming across Canadian media, the show is a much needed media outlet focused on urban Inuit affairs produced for and by Inuit. On this panel, the contributors reflected on their work on the show, Nipivut’s role in community development and the history of Inuit community radio broadcasting. 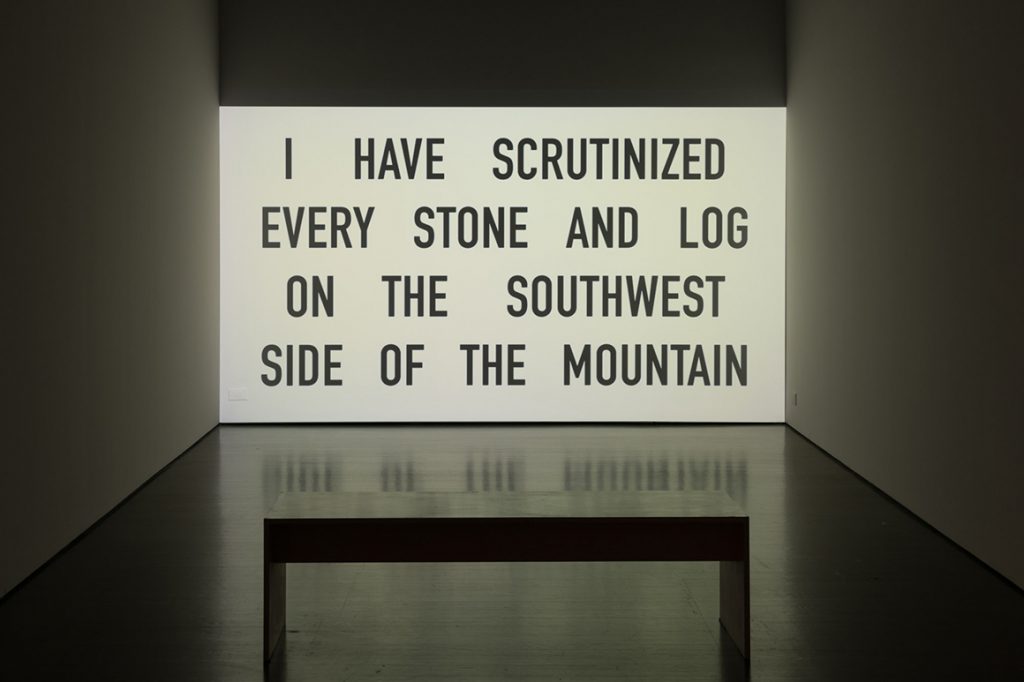 Exhibition Tour in Arabic by Emma Haraké (MA student, Art Education, Concordia University) of the exhibition Among All These Tundras.

Throughout the year the Leonard & Bina Ellen Art Gallery offers commented tours in a number of languages. Guides introduce and address the principal concepts behind the exhibition before focusing on a few select works.

Tours are free and open to anyone interested in discussing and learning more about contemporary art. 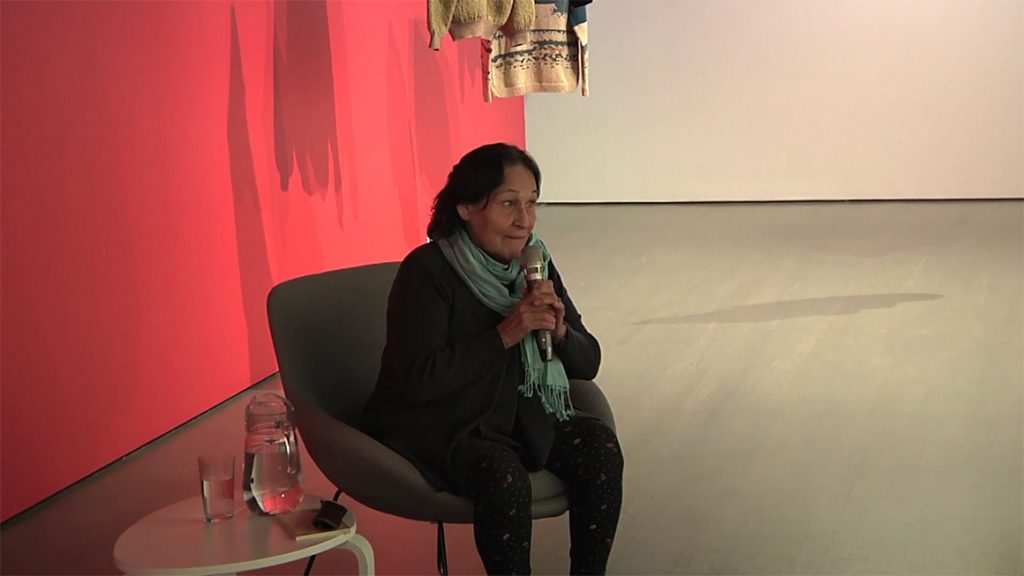 A lecture by Joséphine Bacon

The Tundra, wherever it is, looks alike! It teaches us the immensity of the Earth. Joséphine Bacon responded to the exhibition vis-à-vis her own practice.

Born in 1947, Joséphine Bacon is an Innu poet from Pessamit. Director, lyricist, and author, she is considered as one of the guiding lights of Québec. She has worked as a translator and interpreter for elders, patiently learning how to listen to their words and the traditional knowledge they hold. Bacon frequently says that she is not a poet but a nomad at heart who speaks a language that is full of poetry wherein echo these elders who have marked her life. With these nomads and their love of open spaces in mind she published her first collection “Bâtons à message/Tshissinuashitakana” with Mémoire d’encrier in 2009. “Nous sommes tous des sauvages”, in collaboration with José Acquelin, followed in 2011, “Un thé dans la toundra/Nipishapui nete mushuat” in 2013, and, most recently, “Uiesh – Quelque part” in 2018. As a filmmaker she has directed “Tshishe Mishtikuashisht – Le petit grand européen” (1997) and “Ameshkuatan – Les sorties du castor” (1978).

Lecture in French
Free admission
At the Gallery
Facebook event 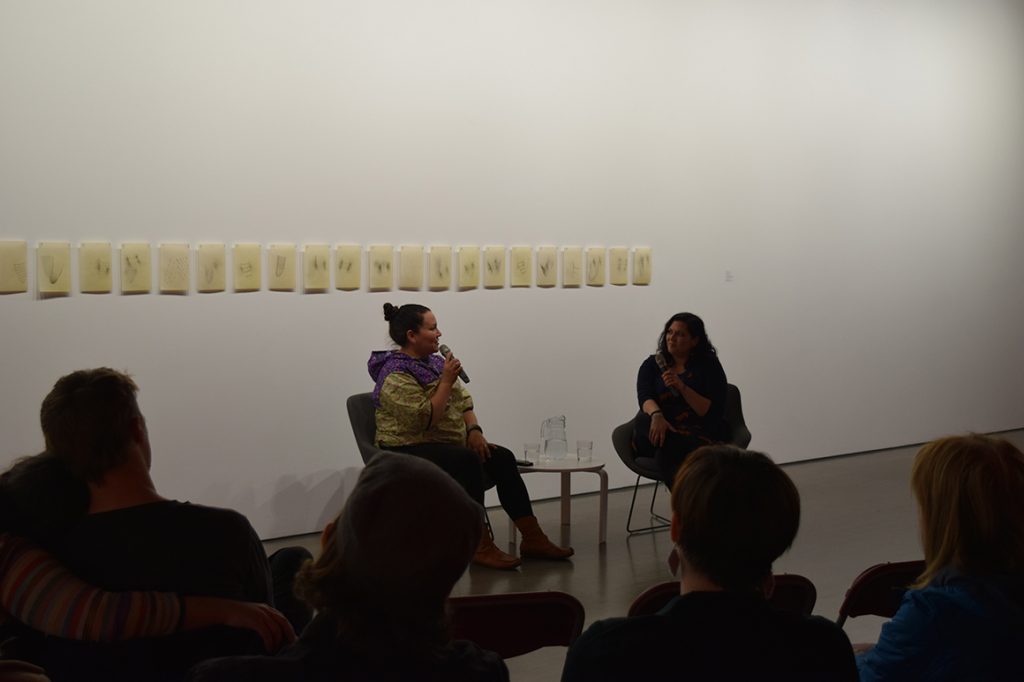 In the final week of Among All These Tundras, an evening presenting Marja Helander’s latest short video Eatnanvuloš lottit (Birds in the Earth) (2018) followed by a performance by Taqralik Partridge.

Marja Helander is a video artist and photographer based in Utsjok and Helsinki, Finland. Her multi-media practice draws from her Sámi and Finnish ancestry. Helander explores themes related to femininity, identity and the tension between traditional Sámi ways of life and modern Finnish society. Her recent work concentrates on post-colonial topics among Sámi including industry and resource extraction in the North with photography and video art that feature the Northern landscape and Sami issues of modernity through a tragicomic lens. Although originally trained as a painter, Helander decided to pursue her interest in photography, graduating from the University of Art and Design in Helsinki in 1999. Since then she has presented works in solo and group exhibitions both in Finland and abroad, with many shows in northern Scandinavia, Canada, South Africa, and Mali. Her video work Dolastallat won the Kent Monkman award at imagineNATIVE Film + Media Arts Festival in Toronto, 2016. In 2017, Helander was chosen as the Finnish Cultural Institute in New York’s artist-in-residency. Her recent short, Birds in the Earth won Risto Jarva Prize and the Main Prize in the National Competition in the Tampere Film Festival 2018 in Finland. Helander´s works are also included in collections in several Scandinavian museums and in the National Gallery of Canada. Helander has also made a public artwork So Everything Flourishes for the Sámi Cultural Centre Sajos, in Inari.

Taqralik Partridge is an Inuk artist, writer, curator, throatsinger, and spoken word poet. She is originally from Kuujjuaq in Nunavik, although she now splits her time between Canada and Kautokeino in northern Sápmi. Partridge’s writing focuses on both life in the north and on the experiences of Inuit living in the south, featuring a mix of influences from hip-hop to Inuit storytelling. Partridge co-founded the Tusarniq festival held in Montreal. Her performance work has been featured on CBC radio one and the BBC program and she has toured with the Montreal Symphony Orchestra. Partridge has also worked as Director of Communications for the Avataq Cultural Institute. In 2010, her short story Igloolik won first prize in the Quebec Writing Competition and the same year she was a featured artist onstage at the 2010 Olympics in Vancouver. In 2018, Partridge was named as a finalist for the CBC Short Story Prize.