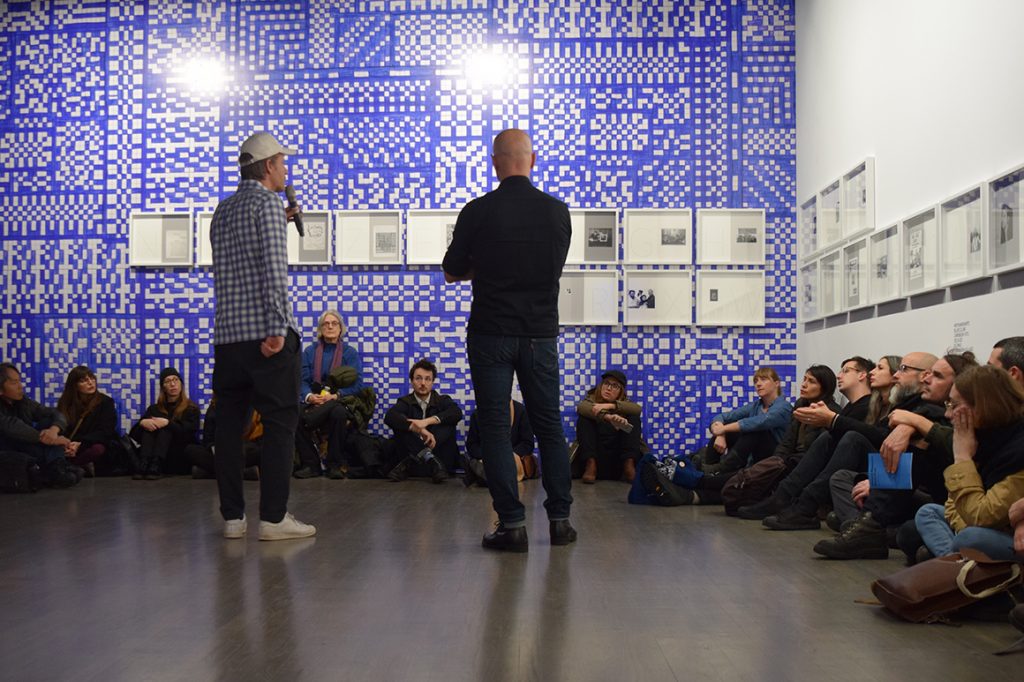 Sylvano Santini is a professor in the Literary Studies Department at Université du Québec à  Montréal. He teaches late semiotics, theories of the relation between text and image, and the avant-gardes. He is preparing a study on “cine-fiction,” a term he coined to define the performative relation of literature to cinema. Researcher with Figura, centre de recherché sur le texte et l’imaginaire, he has organized and moderated numerous activities. He is co-editor of the recently published Le cinéma de Marguerite Duras : l’autre scène du littéraire ? and director of the cultural magazine Spirale and Spirale Web.

In French
Free admission
At the Gallery
Facebook event 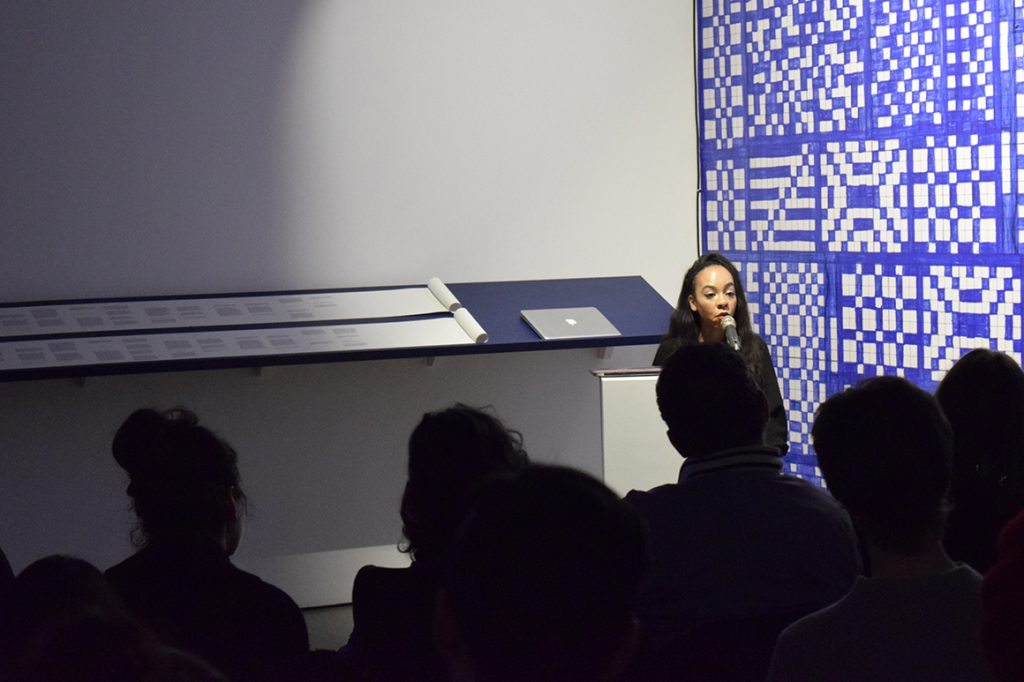 Considering themes of absence, minor histories, and the black radical tradition as introduced in Blues Klair and the research methods they provoke, Los Angeles-based poet and choreographer Harmony Holiday has been invited to present a new performance working with audio and video archives that extend from, surround and inform her practice.

Holding the figure of the exile and the Uncle Tom archetype in mind, Holiday listens, looks, and responds to archives issued from the Black Arts. Approaching archives as spaces that demand and bait encounter, Holiday explores how improvisation opens to rites of passage and ritual, how dance and literature can revivify and chorus with this material, and how we owe embodied engagement to and are responsible for its generational wealth.

Could exile be what happens when exodus is deferred? How is it that some Black mystics go missing from the collective memory or really just vanish, as Albert Ayler and Henry Dumas did? Or as Sun Ra, Amiri Baraka, Abbey Lincoln, Billie Holiday, and Assata Shakur, among others, have. How can acts of mythmaking and reclamation reassemble their legacies, priming reception to and in face of their self-imposed aesthetic exile or just missingness?

Harmony Holiday is a writer, dancer, archivist, and the author of four collections of poetry Negro League Baseball, Go Find Your Father/A Famous Blues, Hollywood Forever, and A Jazz Funeral for Uncle Tom, forthcoming. She also founded and runs Afrosonics, an archive of jazz and everyday diaspora poetics and Mythscience a publishing imprint that reissues and reprints work from the archive. She worked on the SOS, the selected poems of Amiri Baraka, transcribing all of his poetry recorded with jazz that has yet to be released in print and exists primarily on out-of-print records. Harmony studied rhetoric and at UC Berkeley and taught for the Alvin Ailey American Dance Theatre. She received her MFA from Columbia University and has received the Motherwell Prize from FenceBooks, a Ruth Lilly Fellowship and a NYFA fellowship. She is currently working on a book of poems called M a à f a and an accompanying collection of essays and memoir entitled, Reparations: Thieves Who Stole my Blue Days, as well as a biography of jazz singer Abbey Lincoln. 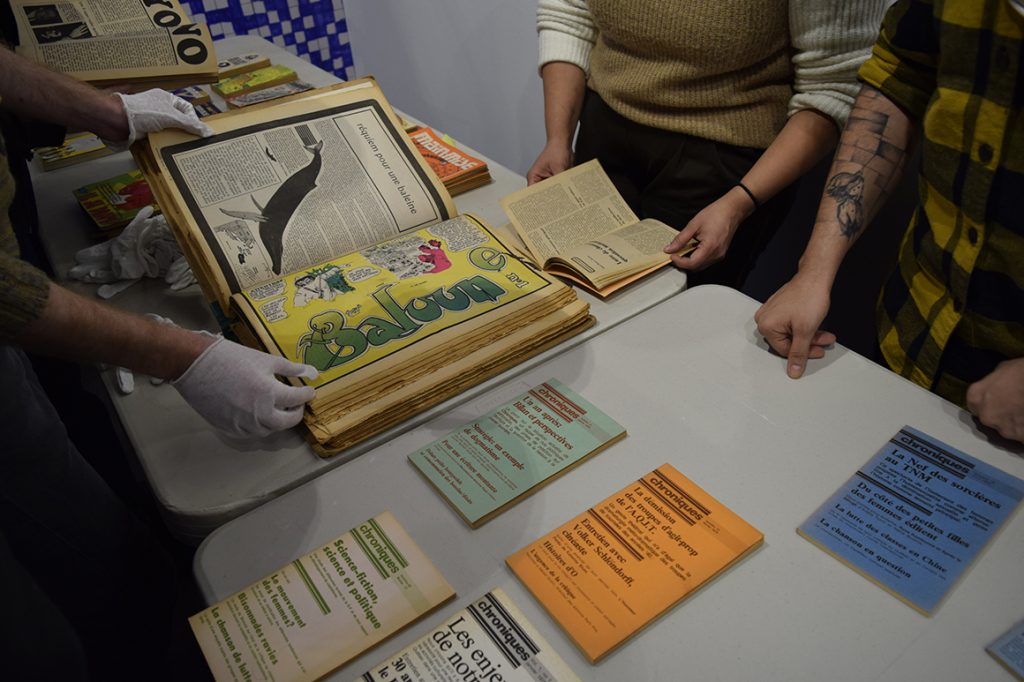 In this workshop we will embark on a comparative reading of Chroniques (1975-1978) and Mainmise (1970-1978), two magazines published in Québec during the later half of the Revolution tranquille. Through the 60s and 70s, Québec, as in other parts of the world, saw an explosion of magazines across the spectrum of the Left. Where Chroniques aligned itself with a neo-nationalist socialism in dialogue with an international Left, Mainmise was the principle counterculture organ for a global psychedelic consciousness-raising. If at first they seem to be at odds in their visual and textual language, it is also possible to read both magazines through a prismatic lens.

With the understanding that magazines are sites for imagined communities where authors and readers (who may never meet) can imagine affinities; this workshop approaches the magazine as local record, as a locale, recognizing that readers and writers often participate in more than one imagined community at once. Participants will be introduced to and discuss the politics of the Left at the moment of publication and engage with the magazines through different forms of “tracing” that incorporate looking, speaking, and mark making. These resulting traces will help inform means or paths of analysis other than a strict comparison of aesthetic, cultural, or political positions.

Felicity Tayler is the E-Research Librarian at University of Ottawa Library, with a PhD in Interdisciplinary Humanities from Concordia University. She has an exhibition practice that engages with the symbolic value of countercultural movements in Québec. Scholarly writing has been featured in anthologies and in Mémoires du Livre/Studies in Book Culture, Canadian Literature and the Journal of Canadian Art History.

Join educator Emma Haraké for a commented tour and conversation on the exhibition in Arabic. 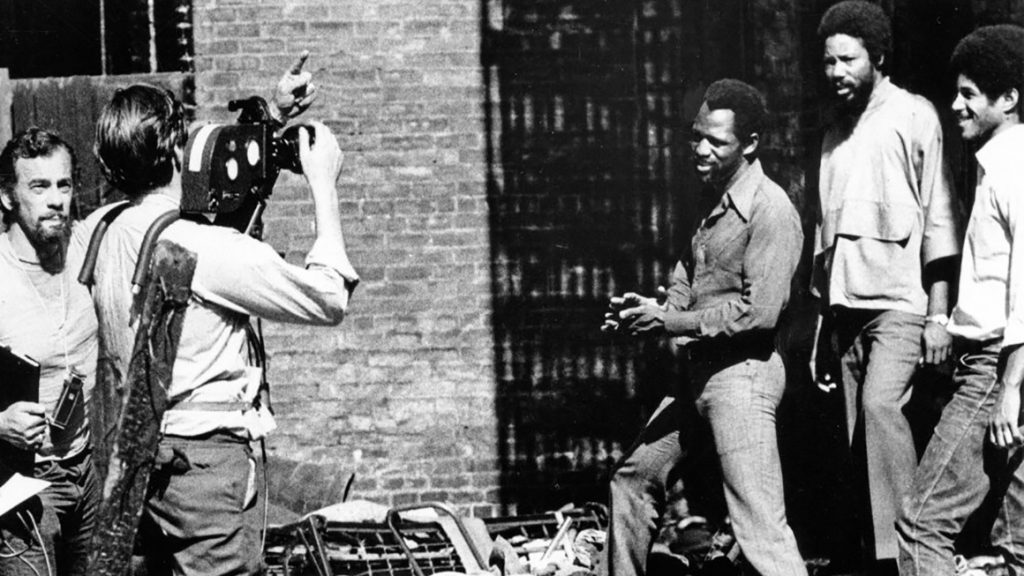 Presented as part of the public programs linked to the exhibition Vincent Meessen. Blues Klair at the Leonard & Bina Ellen Art Gallery, this program brings together two films essential to the Black Power Movement, both newly restored. Shot guerrilla-style on the streets and rooftops of Manhattan, Herbert Danska’s Right On! is a concert film featuring twenty-eight performances by legendary spoken work group and forbearers of rap, The Last Poets. Commissioned by the Public Broadcasting Laboratory in the wake of nation wide rebellions during the summer of 1967, poet Amiri Baraka’s The New-Ark (1968) documents activity at the Black nationalist community center, Spirit House. 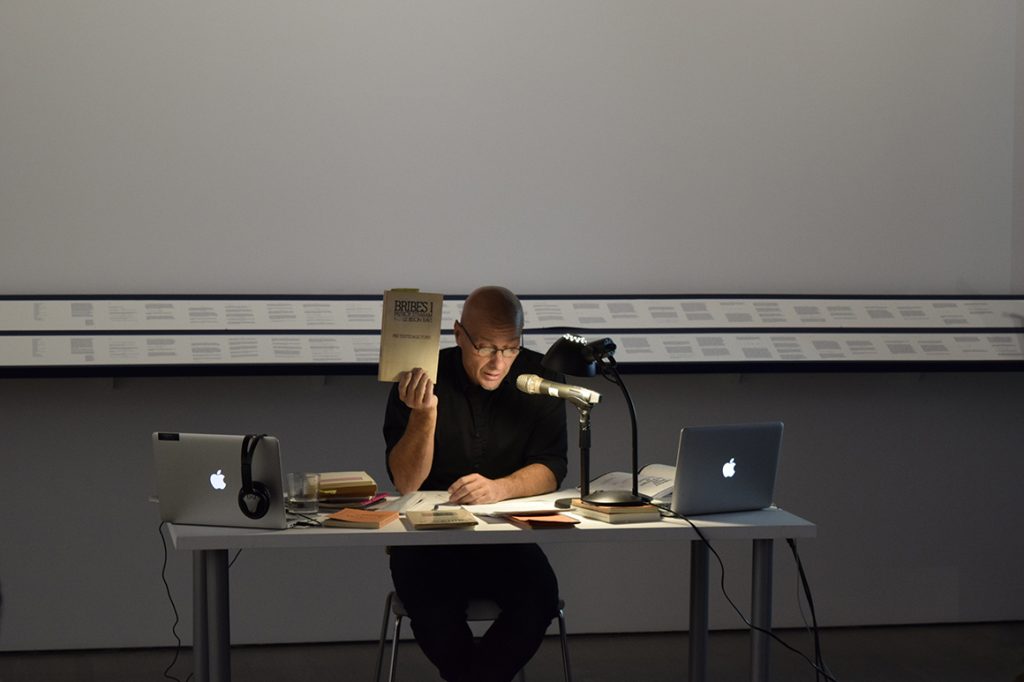 Patrick Straram’s own reading practice presents itself as an archive that, like his subjectivity, is characterized by bastardization. In effect, his readings express his personality, his intimate self, his own thoughts, a selfhood following Henri Lefebvre’s Marxist thesis of the everyday: “to live critically.” They appear in notes scattered throughout the pages of his published books where reviews of his various readings and citations from different sources are juxtaposed, as if on a screen, without apparent concern for their order. It is as if their presentation on the page corresponds to a rhythm of reading unique to his subjectivity, driven in bursts through feeling and self-critique. This lecture will attempt to show that the traces of Straram’s readings, as manifested in his books, anticipate the writing practices of the netizen, as if he was a blogger before his time. Straram’s readings, and resulting texts which have long ranked as bastards of the counterculture, represent an example of an ethic of archiving through self-narrative.

In French
Free entry
At the Gallery
Facebook event 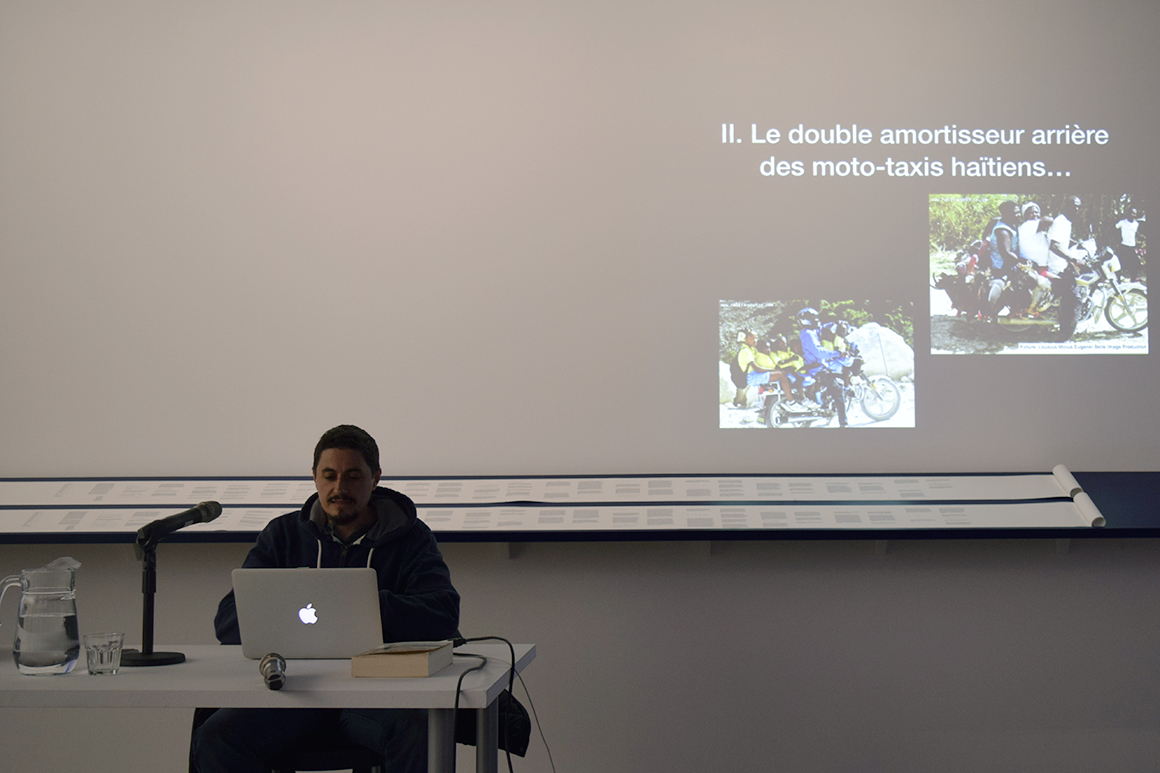 (The cold war of the Jamaican minibus, the double-shocked Haitian motorcycle taxis, and other insignificant signifiers of the Caribbean)

In this improbable geopolitics, Cruse proposes to describe the Caribbean today through a tight framing, one that recounts recent history from below in an attempt to describe the whole through the detail in a near photographic approach:

Romain Cruse is a geographer and author of Une géographie populaire de la Caraïbe and Mai 68 des Caraïbes, both published by Mémoire d’encrier. He is currently professor and researcher at the Institut Catholique Européen des Amériques. A correspondant with Monde Diplomatique and Questions Internationales, he is the director of Carige, a consultancy specializing in applied geography. He lives in Fort-de-France, Martinique.

Presented in collaboration with Mémoire d’encrier and the Department of Geography, Université de Montréal.

In French
Free admission
At the Gallery
Facebook event