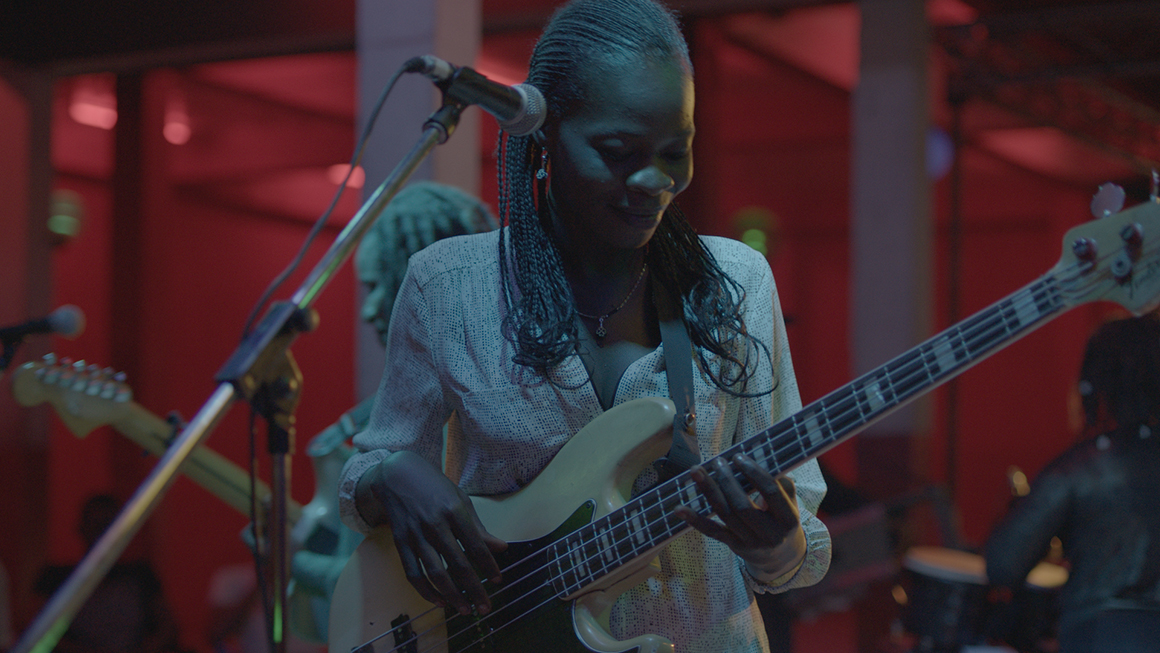 Vincent Meessen, still from One.Two.Three, 2015. Courtesy of the artist and Normal, Brussels

A musical and historical dérive set to a Congolese rumba, Meessen’s video explores the participation of Congolese intellectuals in the Situationist International movement and the unfinished work of decolonization from 1968 to today.

Commissioned for the 56th Venice Biennale in 2015, One.Two.Three circumvents the trap of Situationist mythology by way of a protest song composed by Congolese Situationist Joseph M’Belolo Ya M’Piku in May 1968, its lyrics long folded away in the archives of Belgian Situationist Raoul Vaneigem. Shot in and around the legendary Kinshasa nightclub, Un. Deux. Trois, Meessen worked with M’Belolo and a group of young female musicians to produce a new rendition of the song. In the course of the band’s perambulations through the club and their attunements to one another the venue becomes an echo chamber for the impasses of history and the unfinished promises of revolutionary theory.

A video of the conversation is available in the Audio | Video section.

Brussels-based Vincent Meessen’s work and artistic research have consistently explored the history and afterlife of colonial modernity. Through the use of various media he re-animates hidden or forgotten narratives of the relationship between Europe and Africa into speculative scenarios, pointing to the colonial matrix of western modernity. Both in his work as an artist and in his para-curatorial activities, Meessen likes to use procedures of collaborations that undermine the authority of the author and emphasize the intelligence of collectives. He is a founding member of Jubilee, a Brussels-based platform for research and artistic production.  He represented Belgium at the 56th Venice Biennale in 2015 with the collective exhibition Personne et les autres. Vincent Meessen completed his postgraduate studies in 2005 at the HISK (Higher Institute for Fine Arts) in Antwerp.

Afro-Canadian singer/songwriter Pierre Kwenders’ music is a response to a world that so often asks people who fit comfortably in multiple boxes to pick only one. While Pierre’s music ranges from icy R&B to futuristic hip-hop, his style is rooted in Congolese rumba, the ubiquitous sound of The Democratic Republic of Congo. He also sings and raps in five languages, allowing him aesthetic options most artists cannot. Kwenders 2014 full-length Le Dernier Empereur Bantou established him as a torchbearer for a new wave of African artists. With MAKANDA (At The End of Space, the Beginning of Time), his new full-length, Pierre looks to build on the success of his debut. Produced entirely by Seattle-based Fly Guy Dai (aka Tendai Maraire of Shabazz Palaces), Makanda pivots from Bantou‘s housey thump to something more instrumental, incorporating strong African influence and old-school West Coast hip-hop vibes into Kwenders unique recipe.

Tom McDonough is a writer and critic based in upstate New York and Toronto. He writes extensively on contemporary art, with recent essays on Theaster Gates, Philippe Parreno, Adam Pendleton, Wolfgang Tillmans, Christopher Williams, and Haegue Yang. His articles have appeared in journals such as Afterall, Artforum, Bomb, Canadian Art, October, Parkett, and OSMOS, where he is a contributing editor. Boredom, his anthology in the “Documents in Contemporary Art” series from the Whitechapel, appeared earlier this year. Other publications include The Situationists and the City (Verso, 2009), The Beautiful Language of My Century: Reinventing the Language of Contestation in Postwar France, 1945-1968 (MIT Press, OCTOBER Books, 2007), and the anthology Guy Debord and the Situationist International: Texts and Documents (MIT Press, OCTOBER Books, 2002). He has taught at University of California, Berkeley and Harvard, and currently is Associate Professor of Art History at Binghamton University, State University of New York.

Bob W. White is associate professor in the Department of Anthropology at Université de Montréal and the director of Laboratoire de recherche en relations interculturelles (LABRRI). Since 2012 he has led the multi-sectorial research partnership “Vers une ville interculturelle” (SSHRC 2012-2015), which aims to document intercultural dynamics within urban space. He has published texts on popular music, globalisation, cultural politics, methods of collaborative research, and intercultural politics and cohabitation in a multiethnic context. His first book, Rumba Rules: The Politics of Dance Music in Mobutu’s Zaire (Duke, 2008) received numerous prizes (among them the Anthony Leeds Prize in Urban Anthropology and the Joel Gregory Prize in African Studies). His most recent book (with Lomomba Emongo) is L’interculturel au Québec : rencontres historiques et enjeux politiques (Presses de l’Université de Montréal, 2014). He is currently working on a series of publications with the European Council on the subject of intercultural cities and a monograph on theories of encounter within an intercultural context.