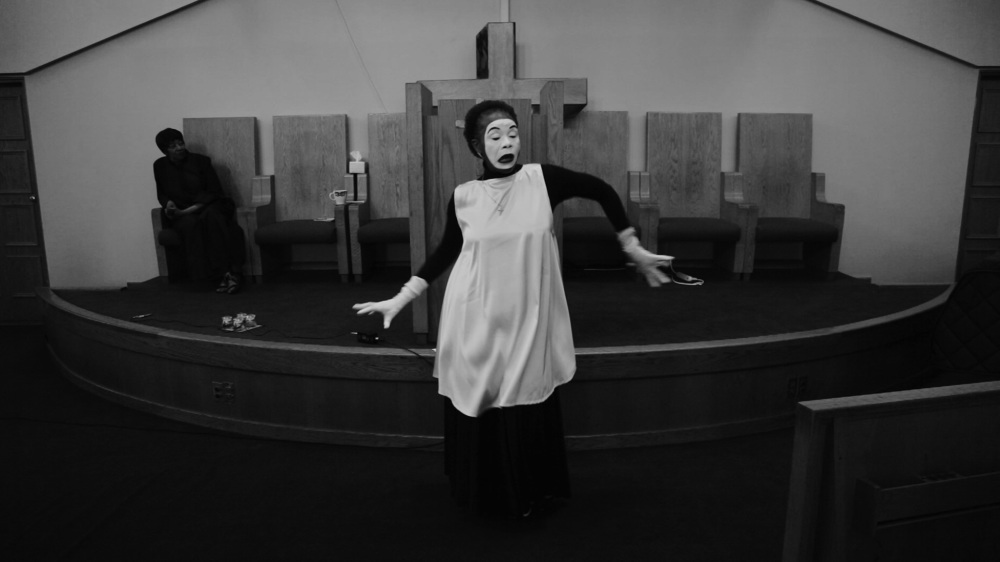 Performance by Steffani Jemison and Garrett Gray
On Similitude

Brooklyn-based multidisciplinary artist Steffani Jemison is featured in a two-part weekend event positioning the history of mime and acts of mimicry as a means to explore black subjectivity and embodied communication.

The weekend begins with a screening of Jemison’s videos Sensus Plenior (2017) and Similitude (2019) followed by a post-screening conversation between Jemison, performer Garrett Gray, and critical race theorist Philip S.S. Howard. The next day, Jemison and Gray present On Similitude, a performance-lecture and live companion to Jemison’s videos.

With Sensus Plenior, Jemison illuminates the black gospel mime practice of Reverend Susan Webb, leader of the Mime Ministry of Harlem, while Similitude offers a non-linear account of Garrett Gray’s pantomime practice by placing mimicry within the everyday. Structured as a rehearsal, On Similitude investigates preparation, self-reflection, and interiority.

In what ways does the body extend understanding? Can the body transmit what is unspoken? Mime for Jemison offers a framework to examine the power of wordlessness, how black bodies are socio-politically positioned, and how movement and gesture speak, translate, and encode meaning and experience. By focusing on this underexplored facet of Black American culture, Jemison outlines forms of embodied quietude that lead to alternative modes of conveying histories and engaging in dialogue.

Steffani Jemison lives and works in Brooklyn, New York. Jemison’s multidisciplinary practice explores black culture and the nature of understanding through discursive inquiry. Her video Sensus Plenior has been exhibited at Jeu de Paume, CAPC musée d’art contemporain de Bordeaux, and the Whitney Biennial 2019, the latter accompanied by the performance On Similitude. Her work was included in the touring group exhibition Black Refractions: Highlights from The Studio Museum in Harlem (2019-2020). Other collaborative and group exhibitions have been presented at the Drawing Center (2014), the Brooklyn Museum (2014), and the New Museum of Contemporary Art (2011), among many other venues. Upcoming presentations include new and recent work in Steffani Jemison: New Videos (Stedelijk Museum) and Steffani Jemison and Samson Young: Decoders/Recorders (De Appel).

Garrett Gray is an actor, educator, and mime from Savannah, GA who currently resides in NYC.  He grew up with a love for classical theatre and clowning, which lead him to the American Mime Theatre founded by Paul J. Curtis in 1952. Under the direction of the Theatre’s Artistic Director Jean Barbour, he was introduced to this beautiful art form and has been hooked ever since. His favorite theatre credits include:  Ariel in the Tempest (Columbia Stages), Bob in American Buffalo (Kenny Leon’s True Colors Theatre), and his time as a company member with the American Mime Theatre. TV & Film credits: Bolden!, USA’s Necessary Roughness, CBS’s BULL, and Hulu’s Wu-Tang: An American Saga. He would like to thank Steffani Jemison for her diligence, collaborative spirit, and her trust in his work.

Dr. Philip Howard is an Assistant Professor in the Department of Integrated Studies in Education, Faculty of Education at McGill University. His research interests are in the social formations, pedagogical processes, and epistemological frames that mediate the ways we come to know ourselves, create community, and exercise agency for social and racial justice.