The 2020-2021 SIGHTINGS programming takes place outside the limits of Concordia’s Hall Building to unfold online in response to the stakes of the cube, itself reformatted as an open and virtual site. The cycle of projects will work with the notion of measures—as a means of negotiation, calculation and representation of slippery in-between zones. Measures are commonly referred to as abstracted indicators or as a set of regulatory actions and procedures designed and implemented to manage, prevent or redress a situation: over time, new measures become default standard practices. The current edition of SIGHTINGS contemplates measures as a way to interpret and confront the subtle and not so subtle agents that indistinctly permeate beings, spaces, and things, invisibly link them and regulate their relations; those determinants of distance and proximity, access and isolation.

The SIGHTINGS program is developed by Julia Eilers Smith. 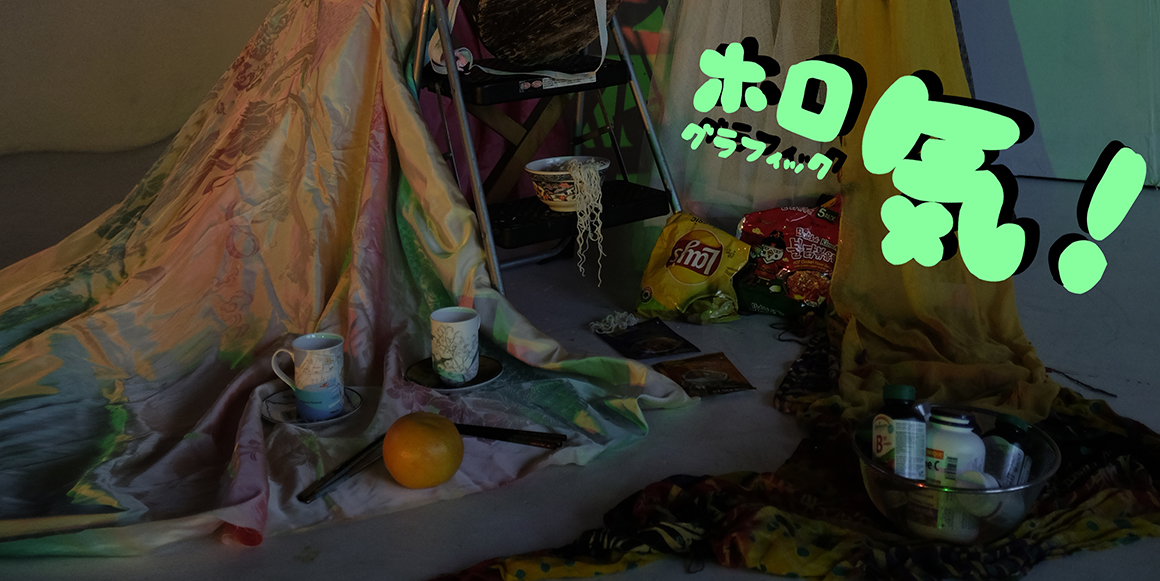 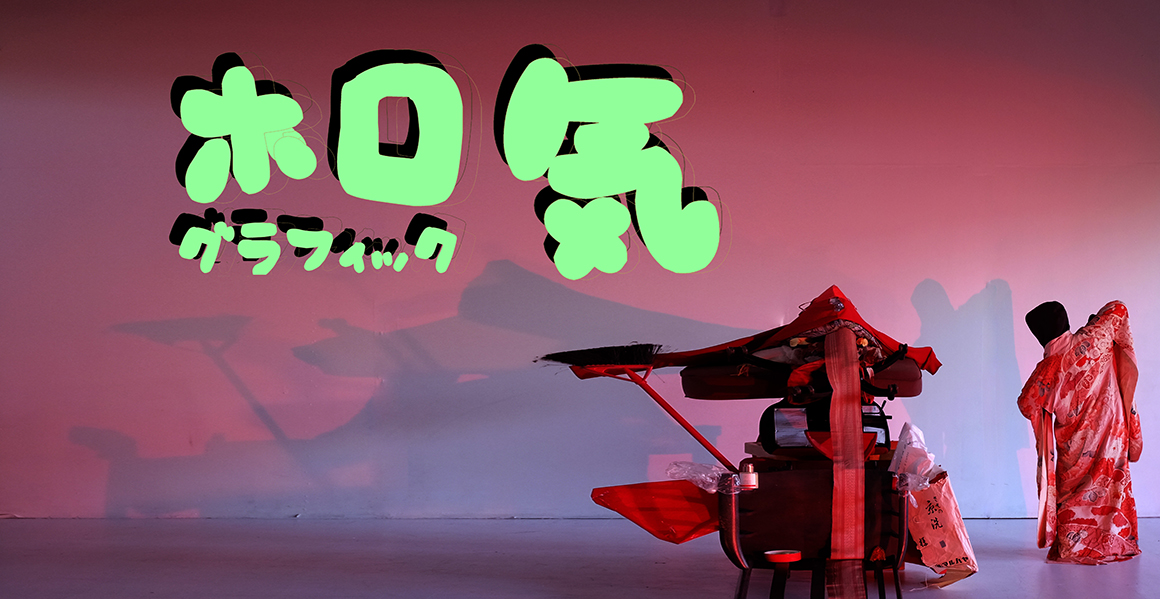 Holographic Ki is a Japanese-mess-mix musical made with my mother, with whom I watched most of the Rodgers and Hammerstein movie collection growing up. Together we picked “Getting to Know You” from The King and I as the theme song for this work. The project emerges from intergenerational sources of laughter, rhythm and aesthetics, haiku-like scenes and furniture monsters. It delves into nonlinear aging, the fluidity of the “host” position, and emergent icons created from the mundane as conjurers of real and imaginary ancestors. These icons appear monster-like (a monster is understood as being “of multiple origins”) and puppet-like in their potential. We dance for them, they dance for us. Through a relational agency between human and non-human, we look for an abcanny sweet spot: a flatness, a horrific and beatific suspension.

The work was first developed as a short performance in 2019, when physical proximity was possible as well as easeful. Here, as part of SIGHTINGS’ virtual exhibition cube, and in this moment, we find new ways of coming together to perform.

Conversation between Anne and Hanako

Hanako: How is performance used in your work as an activist?

Anne: Performance is the heart of my activism. I am an older adult and a member of RECAA (Respecting Elders: Communities Against Abuse). We are older adults, or elders as we call ourselves, from the ethnic communities of Montreal who created RECAA over 20 years ago to meet other people of our age and talk about elder mistreatment—aiming to break the silence on individual and community abuse.

Quite simply we had to find a means to bring up a subject that is taboo to many elders who face challenges as immigrants, marginalized by language and culture. Our technique uses performance or short, silent theatrical scenes, developed from Augusto Boal’s Forum Theatre workshops, in which we enact some of the realities lived by older adults experiencing mistreatment. I should also add that the other side of our vision/mission is to work towards a culture of respect for all. This translates into support for each other in getting help and actions that result in a better quality of life.

In the beginning we were very shy in acting out scenes depicting feelings of fear, pain, anger, fragility, and impotence against powers that control our lives. But acting has been an empowering adventure into self-discovery and it is exciting and cathartic. Each encounter with elders in a workshop is a unique performance, one which involves all participants as “spect-actors·actresses.” Our actors·actresses do not speak but they communicate with their bodies and facial expressions.

Hanako: Can you retell that story of going to a radio show as a kid and being asked what Christmas was like at home for you as a Japanese family?

Anne: This is a funny story. My mother was Irish/Portuguese, my father Japanese. They met in Singapore and, with the exception of my youngest sister born in Japan, the three girls and one boy were all born in Singapore. It was the 50s and we lived between Japan and Singapore.

The Americans were in Tokyo in the early 50s and had a radio station called “Far East Network, Tokyo.” When I was eight my siblings and I were invited to be interviewed on a program about how the Japanese spend Christmas. As you might have guessed some of us look Asian and others Portuguese. We definitely look brown and not white American. Young as we were we knew that we did not in any way represent how the Japanese celebrated Christmas. We tried to tell everyone but they just said we were to go on. The question was, “So how do you spend Christmas?” Well, we were honest and told them that we usually go to midnight mass and then eat and open our presents. “So what do you eat?” and we told them, “Well we have turkey, ham, potatoes and brussels sprouts.” “Really? Do you have anything uh… Japanese to eat?” Never at Christmas, we answered. “What about presents?” We said: “We write to Santa Claus and he tries to bring us what he can every Christmas.”

Silence, and then, “Thank you very much, Hoshimi children for telling us how you spend Christmas in Japan.”

Anne: What does performance mean to you?

Hanako: These days I have simple questions and interests regarding performance with over-the-top complex answers. Why do we make performance? What is performance? How does it happen? What are we doing when we do it and when are we doing it? What is the fourth wall? I used to think that the content of performance is what made it valuable, but lately I feel that the question of the mechanism of performance is the crux of the matter. Performance is ultimately relational and brings up questions of readership and appearance or disappearance: under whose and what terms do things appear and become intelligible? Performance is like an ontological quiver or fracture and is a way for us to see that things are also other than what they first appear to be. I think you and I both use performance to get to know ourselves, one another and the social contexts in which we live. And that is a creative endeavour.

Anne: Can we talk about how you came to the idea of “monsters”? How does it relate to our performance together?

Hanako: I identify with the definition of monster as “an animal of myriad origins,” as evoked in Ocean Vuong’s On Earth We’re Briefly Gorgeous. I am a first-generation person born on Turtle Island/Canada and originating from so many different places and combinations of ethnicities that make me, and you before me, from nowhere in particular. Monsters are an ode to this made-up origin and hybridity, as well as a continuation of your very special family practice of moving our house around inside the house, changing the location of furniture and whose room belongs to whom (with our ok!). And Kai (my 7-year-old son), who is often found nested in a fort or a spaceship he made with pillows, chairs and all other useful bits he has culled from the home.

The monsters in Holographic Ki are made with the objects of our combined homes, through a process that brings the space inside the space, or the living space into itself. Combinations of personal history, cultural reference and everyday things enter the performative space. Out of their habitual order, cartoon-like in their timeless existence, these furniture monsters disavow linear time and become sources of meaning and connections to other temporal dimensions. I find humour and humility in this relation between surface and depth: there’s a theory that says that the universe is a 3D projection of a lower 2D dimension, holographic in other words. Our dances are mostly frontal and very simple and our kimonos are 2D designs that become 3D when worn. Through flatness I find entry points into non-binary sensibilities and questions of authenticity. The word Ki from the title also helps make some sense here: it is a Japanese passepartout word generally understood as ‟spirit,” but its use is so widespread that its meaning is more ambiguous. It indicates “the ether of intention” and also change within the quotidian as well as the spiritual. Another way of putting it is to acknowledge the animate in everything. It also means “tree.”

Hanako Hoshimi-Caines is a dancer, performance-maker and organizer born and based in Tiohtià:ke/Montreal. Her work plays with the pleasure and the haunt of the familiar as strategies of resistance and transformation, and invests in performance as something both mystical and a skill to be learned. Hanako has collaborated with a range of dance artists, choreographers and companies, notably the Cullberg Ballet in Stockholm. Her independent and collaborative works have been shown in Canada and internationally, of which the latest piece titled Radio III, a collaboration with Zoë Poluch and Elisa Harkins, premiered at the MAI (Montreal, arts interculturels) in June 2019 with performances in Vancouver and Sweden. Hanako recently graduated with an honors degree in Western Philosophy from Concordia University. She is currently artistic co-curator of the Centre de Création O Vertigo.

Anne Caines is a lifelong community worker and activist. She is a founding member and the current coordinator of RECAA (Respecting Elders Communities Against Abuse), an activist organization that works to counter elder abuse in ethno-cultural communities. RECAA uses the theatrical techniques found in Augusto Boal’s Forum Theatre workshops in which scenes of abuse are enacted in silence to overcome language barriers. Previous to her work with RECAA, Anne worked with CAP (Child Assault Prevention) and SAWCC (South Asian Women’s Community Centre).

I would like to thank my collaborators Jade Tong Cuong for art design and costume, Stephen Quinlan for art production, Matthew Woodley for web development, Caroline Desilets for photography, Andrew Whiteman for the musical track, as well as Julia Eilers Smith and the team at the Leonard & Bina Ellen Art Gallery. The poem recited by Anne in one of the videos is Wallace Stevens’ Of Mere Being (1954).

As I reflect on intergenerational relations and origin through this project, I want to recognize that as a first generation person born to immigrants of this land, Turtle Island has served as a place of opportunity for my family and that this has come at the expense of the indigenous peoples of these lands. It is with great gratitude that we can call this place our home, and commit to persist in deconstructing the colonial vision by which settling here was made possible.