The projects for the 2021-2022 edition of SIGHTINGS take up the theme of fiction as a place for reality in-the-making. Informed by the recent efforts to dismantle those fictions petrified as monuments, memorials, and statues, and, with them, the status-quo they reinforce, the program asks questions of collective memory, faithful representation, and the validity of facts—in particular how these interact with public space and the built environment. Working within and beyond the premise of the cube, interventions examine how fictions are constructed and how they take up space, what models of truth and forgetting they carry, and how they produce what is taken for reality. 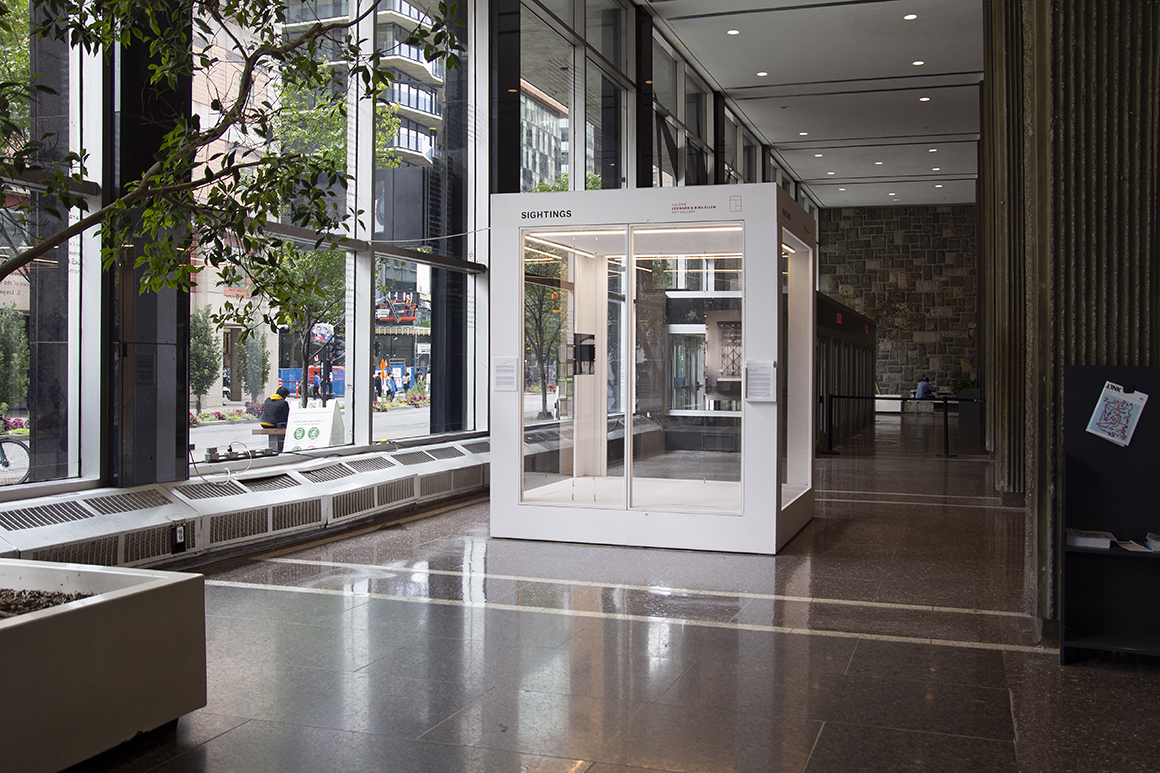 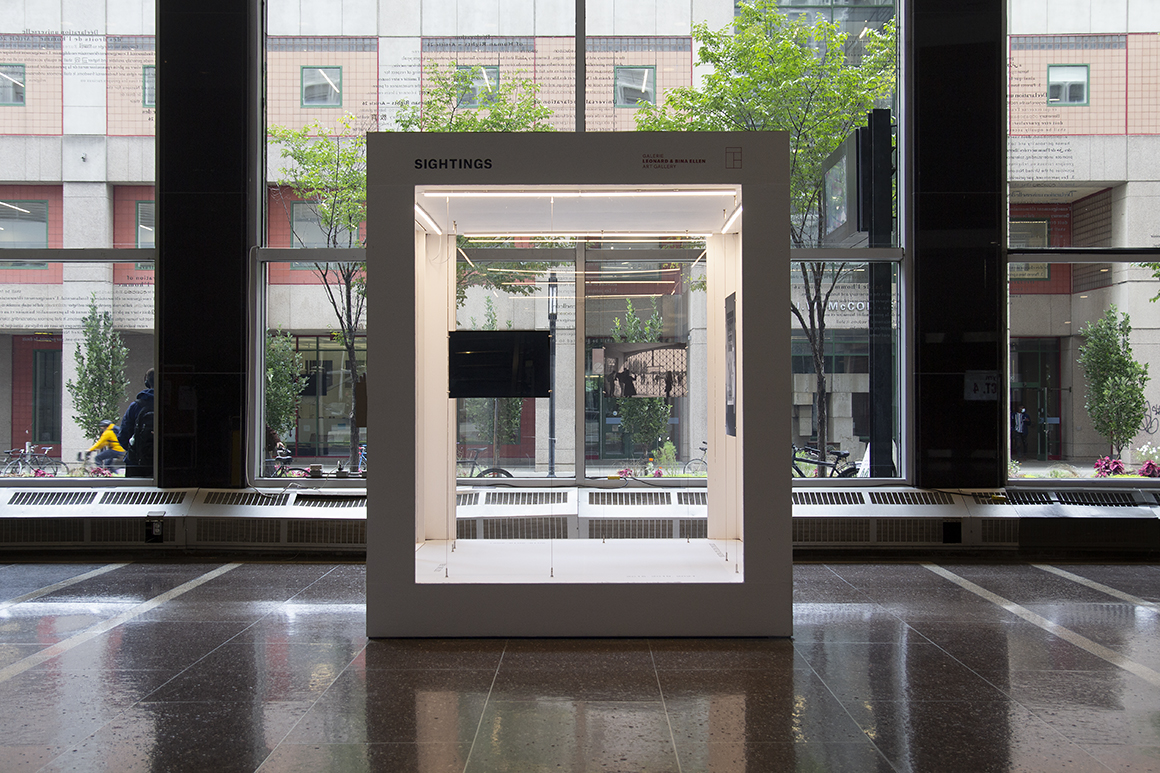 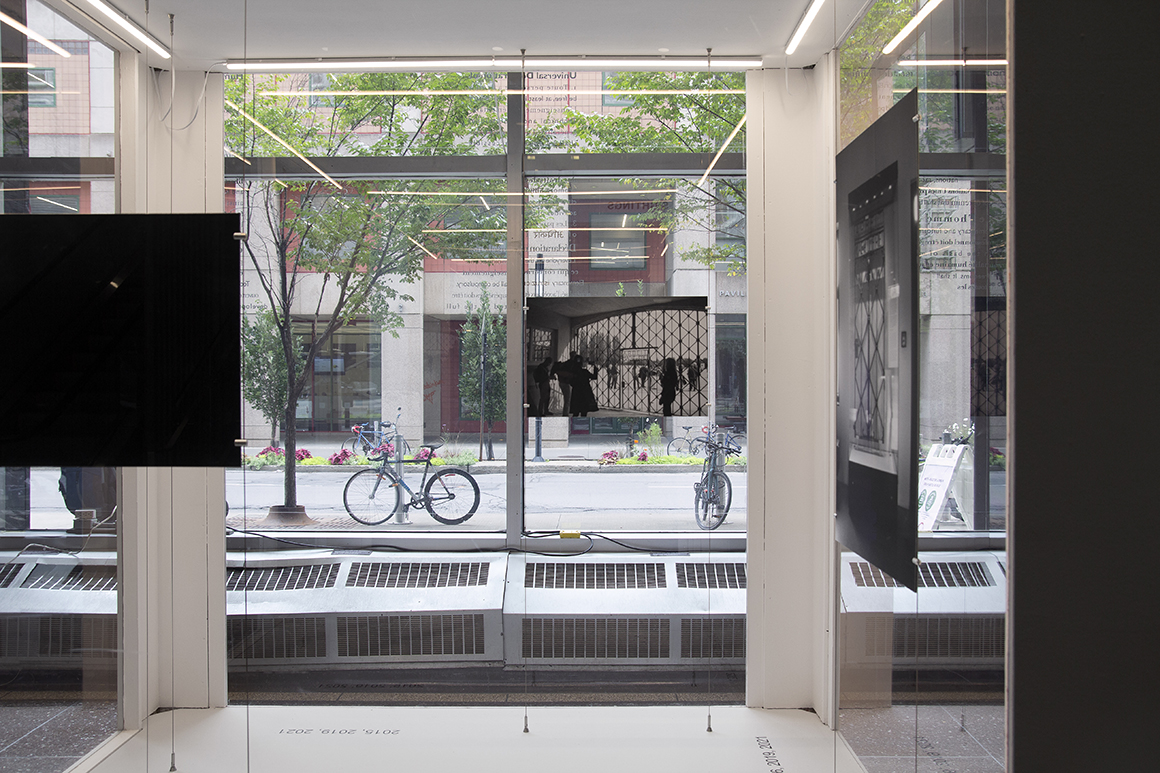 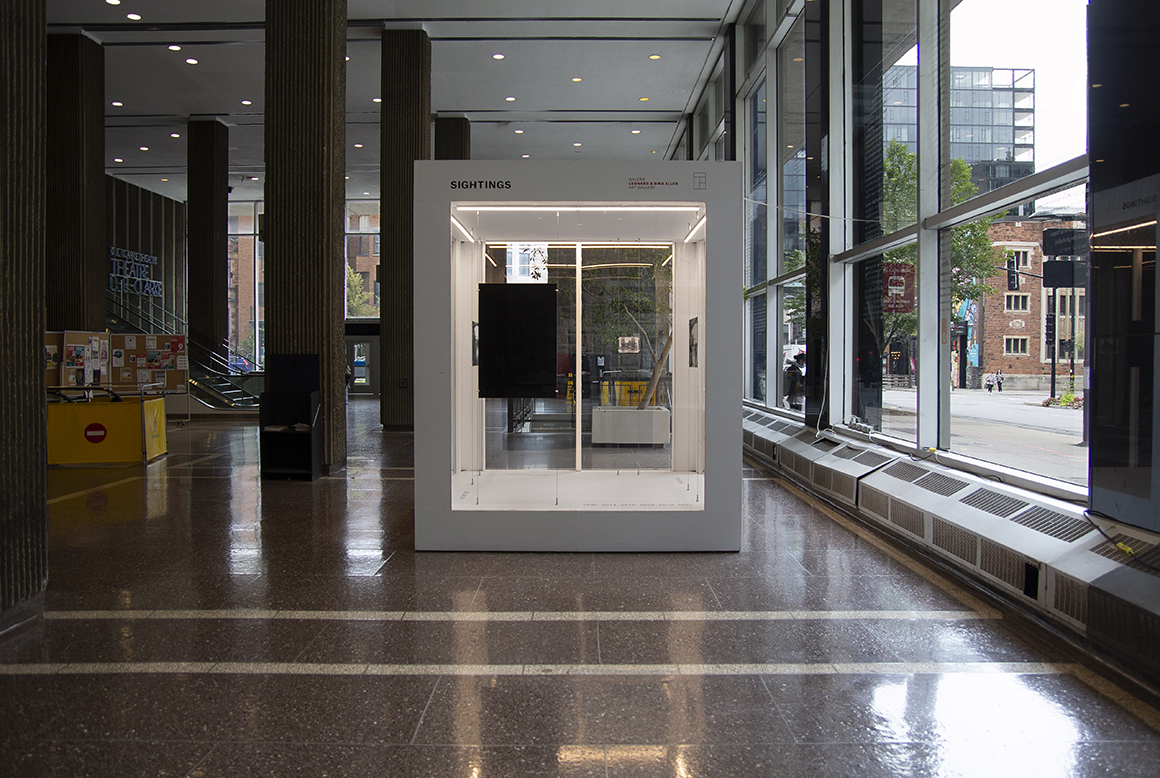 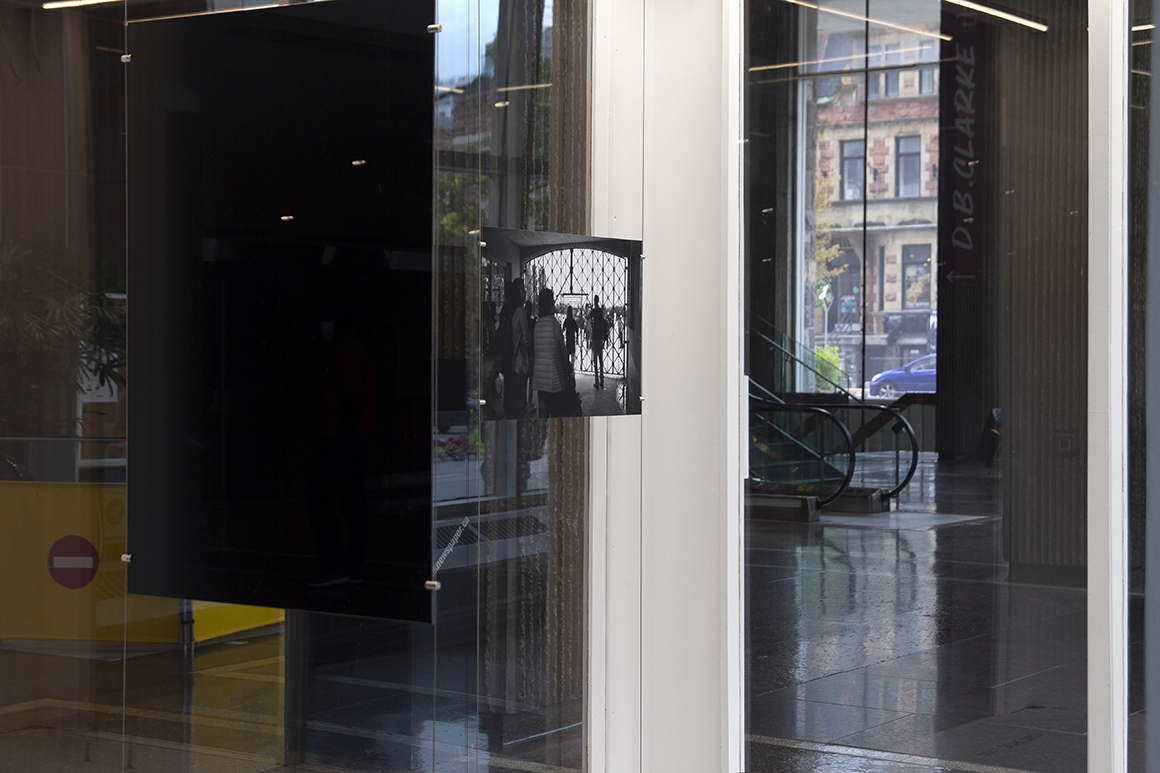 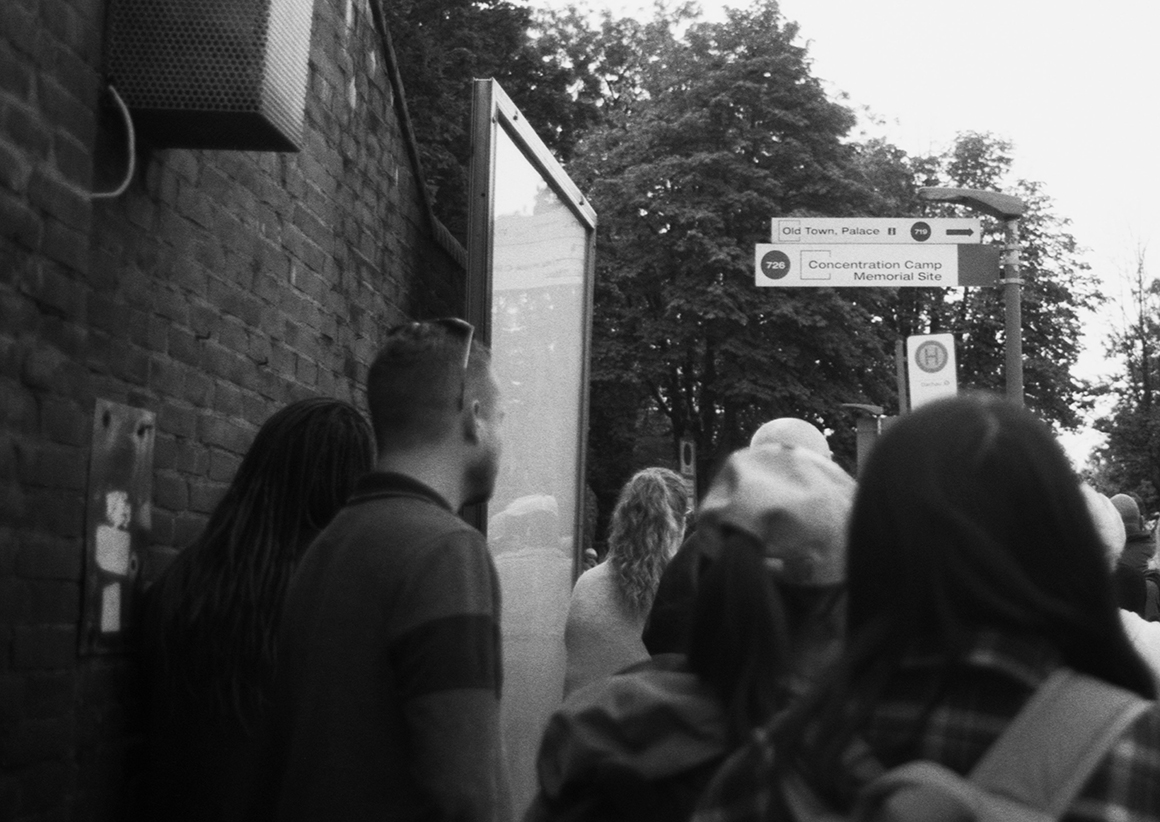 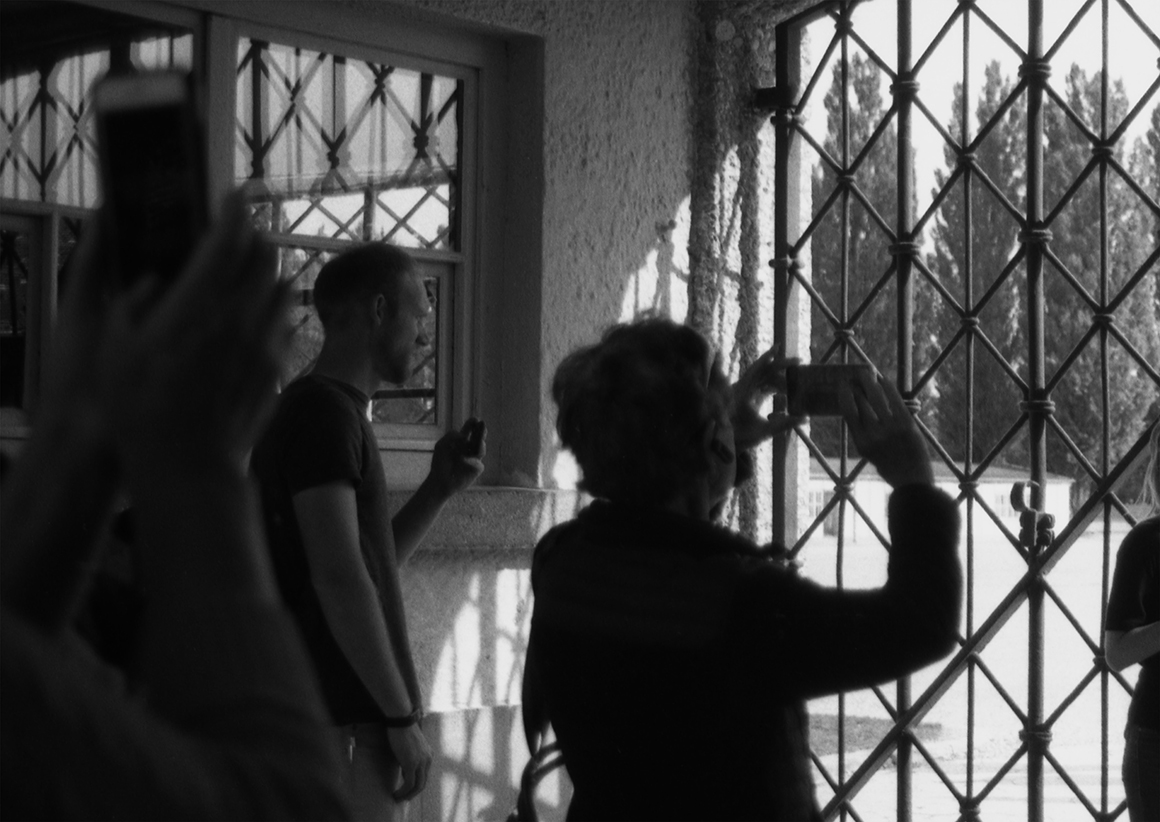 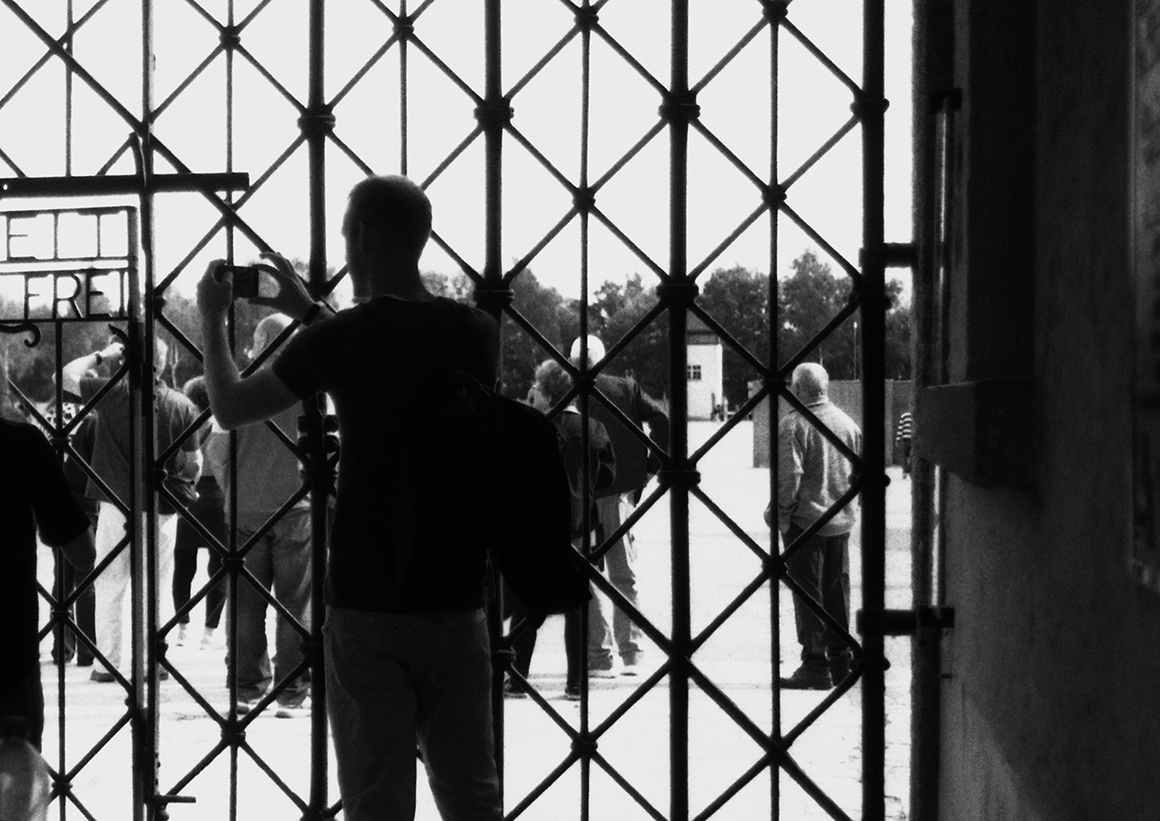 A project by Emmanuelle Duret

Emmanuelle Duret lives and works in Tiohtià:ke / Montréal. She has participated in research residencies and group exhibitions at several centres including VU photo, Avatar, and Axenéo7, and is currently completing her Master’s degree in Visual and Media Arts at the Université du Québec à Montréal. Through an interdisciplinary and conceptual approach, Duret explores the boundaries and links between text, image, space, memory, and history while creating a dialogue with photography as a way to bring about historiographic reflections. Her current projects examine memorial sites, dark tourism, intergenerational transmission, and written and oral history.

Die KZ und die Gedenkstätte: Replica I[1] is a reflection on the museification of memorial sites, in this case, the Dachau Concentration Camp Memorial Site[2] , in Germany. Through photography, archives, text, and exhibition design, the project aims to question the subjective and ethical relationships visitors have with a site that is so highly charged by loss and destruction.

Built on the grounds of a former gunpowder and munitions factory from Word War I, the Dachau camp opened its doors in March 1933, shortly after the National Socialist Party came to power. Dachau served as a prototype for other concentration camps that opened later and remained operational throughout the Third Reich’s twelve-year history. At the end of April 1945, the camp was liberated by two divisions of the U.S. Army, revealing horrors that are still considered unspeakable today and which most German civilians claimed not to have been aware of.

Today, the concentration camp is a place for commemoration, education, and tourism attracting hundreds of thousands of annual visitors who learn about its historical events in the exact location where they occurred. Many temporally distinct entities thus enter into dialogue through the museification of this site: the concentration camp in operation between 1933 and 1945 as a biopolitical structure of production, domination, and destruction; and the camp as a memorial dedicated to the duty of remembrance, first improvised by the liberators and survivors in 1945, and then managed by the Bavarian State Government from 1965 to the present.

Here, our attention is focused on one of the camp’s architectural elements, the Jourhaus[3] gate, with its cynical inscription Arbeit Macht Frei (“Work sets you free”), a maxim that was integrated into many other camps (Auschwitz, Sachsenhausen, Theresienstadt, Gross-Rosen). Tens of thousands of the Dachau camp’s deportees[4] suffered and died from malnutrition, disease and epidemics, physical and psychological abuse, forced labour, and daily violence at the hands of the SS.

A symbol of death and transition, the gate through which visitors both enter and exit the camp is actually a replica of the original, which itself is installed at the very end of the memorial’s permanent exhibition, just before the commemorative room.[5] Visitors try to photograph the replica from the best possible angle. This is the scene I have also photographed: the camp itself exposed; the replica as object of fascination; a handful of visitors, camera or cellphone in hand, trying to capture the portal through which thousands of deported people have disappeared—who also capture what thousands of other tourists before them have photographed.

Here, the work of remembrance is confronted with the ontological shift that results, on one hand, from the presence of a replica, and on the other, from the visitors’ act of photographing it. In this context, where historical violence is transformed by museological and touristic imperatives, what are we witnessing? Can photography incite us to question and activate the ethical and empathetic links that remembrance requires?[6]While some visitors seem to consider photographing the site disrespectful, others do it unabashedly.

The contingency of my approach might be considered somewhat of a cliché. I went to Germany with my analogue camera; my instrument of choice despite its obsolete status. It has a limited number of frames, a lack of image definition, unpredictable exposures and chemical processing, not to mention the black and white film—so iconic in the repertoire of concentration camp images, whether taken by persecutors or allies. When these same allies opened the gates,[7] could they ever have suspected the traumatic rite of passage through which they had just been, and from which the deportees would soon emerge? Perhaps my choice of camera has less to do with the desire to produce images than the search for a contingent experience. In this sense, the images I produced are largely dependent on the story of their production, their interpretation and commentary.

Here, a fragmented reflection of the camp’s visual politics collides with the context of SIGHTINGS. The cube is transformed into a temporary memorial box that substitutes visitors of the camp memorial with the viewers and passers-by of the Hall building who are invited to consider how we look back on history. The four photographs place us on the threshold of the camp. We are positioned behind four facing images that form an interior dialogue accessible only obliquely or head-on through the empty space of the cube: a space-time gap, a space to reflect on the distance history irremediably places before us.

[1] KZ (pronounced “kah-tset”) is an abbreviation for konzentrationslager in German, or “concentration camp” in English. Gedenkstätte in German means “memorial site” in English.

[2] It is important to distinguish between the different Nazi camps to understand the fate of the various groups who were imprisoned there: concentration camps, forced labour camps, transit camps, prisoner-of-war camps, and death camps each served a different purpose.

[3] The Jourhaus is a building located at the entrance to the camp. Jourhaus is a military term that combines the French word jour (day) and the German word haus (house). It was built by detainees in 1936.

[4] In the aftermath of the war, the different deportee groups were often undifferentiated. In France, for example, the term déporté·e was often used indiscriminately, representing first and foremost the figure of the resistant deportee while at the same time ignoring other distinct groups. The use of the term “deportees” here is meant to simplify the text and is not intended to group all fates under the same umbrella.

[5] The replica was installed for conservation purposes in 2015, after the original was stolen in 2014 and recovered in 2016.

[6] The Dachau memorial offers a post-visit mediation exercise called “Was bleibt?” (“What remains?”) where participants are invited to share thoughts on their visit through photographs representing different parts of the camp.

Emmanuelle Duret lives and works in Tiohtià:ke / Montréal. She has participated in research residencies and group exhibitions at several centres including VU photo, Avatar, and Axenéo7, and is currently completing her Master’s degree in Visual and Media Arts at the Université du Québec à Montréal. Through an interdisciplinary and conceptual approach, Duret explores the boundaries and links between text, image, space, memory, and history while creating a dialogue with photography as a way to bring about historiographic reflections. Her current projects examine memorial sites, dark tourism, intergenerational transmission, and written and oral history.