SIGHTINGS 8: You Are So Dead Fly

SIGHTINGS is a program of satellite exhibitions initiated by the Leonard and Bina Ellen Gallery in 2012 to examine how we comprehend the exhibition space and the modes of display of artworks. This project refers to four pioneering essays written by the Irish critic and artist Brian O’Doherty between 1976 and 1981 – published together in 1986 as Inside the White Cube: The Ideology of the Gallery Space. In these essays O’Doherty theorized certain issues linked to a modernist conception of the exhibition space that he called the “white cube,” neutral and adaptable; this conception has remained current because it still defines a large number of galleries today. SIGHTINGS was developed to emphasize the persistence and false neutrality of the white cube and provide an experimental platform for artists and guest curators to generate new strategies of display and to test the limits of its adaptability.

SIGHTINGS is located in the ground floor of the Hall Building at 1455 de Maisonneuve Blvd. West

SIGHTINGS 8: You Are So Dead Fly 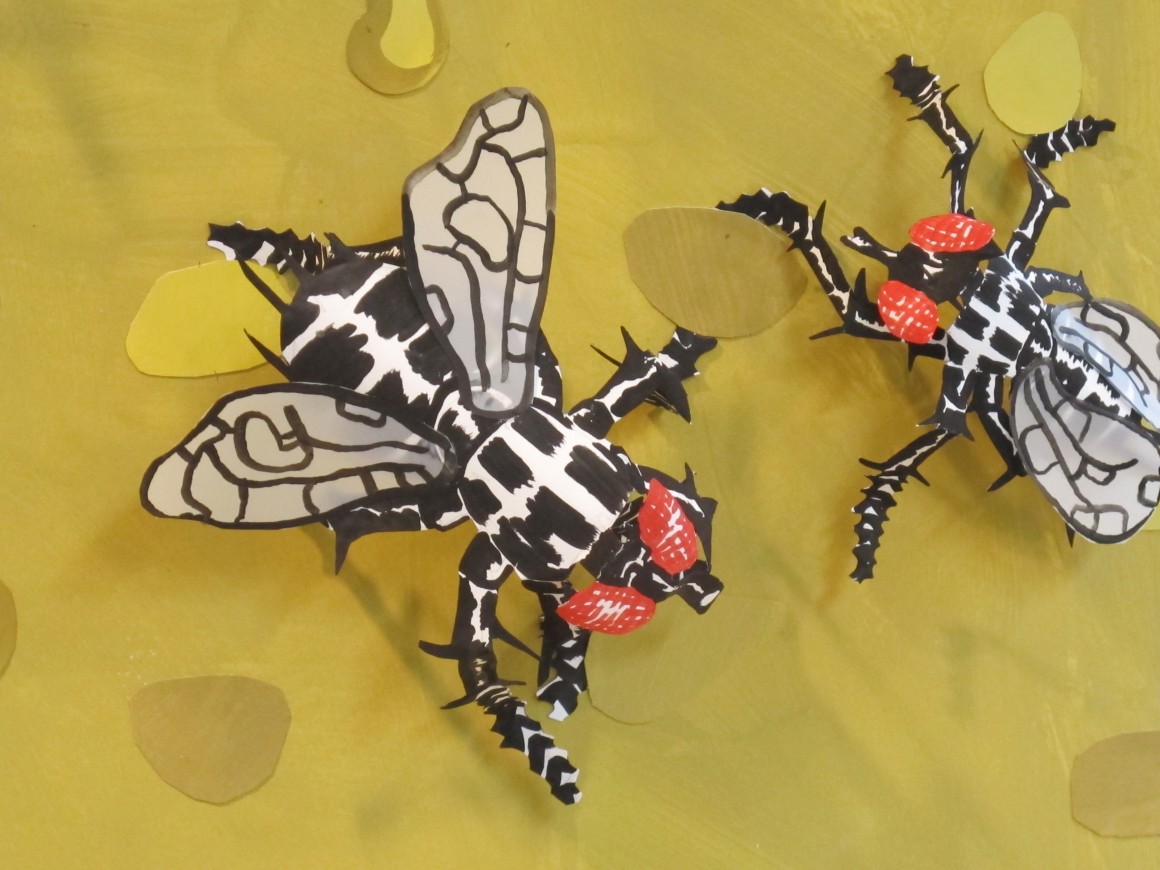 Adrian Norvid, You Are So Dead Fly (detail), 2013. Courtesy of the artist 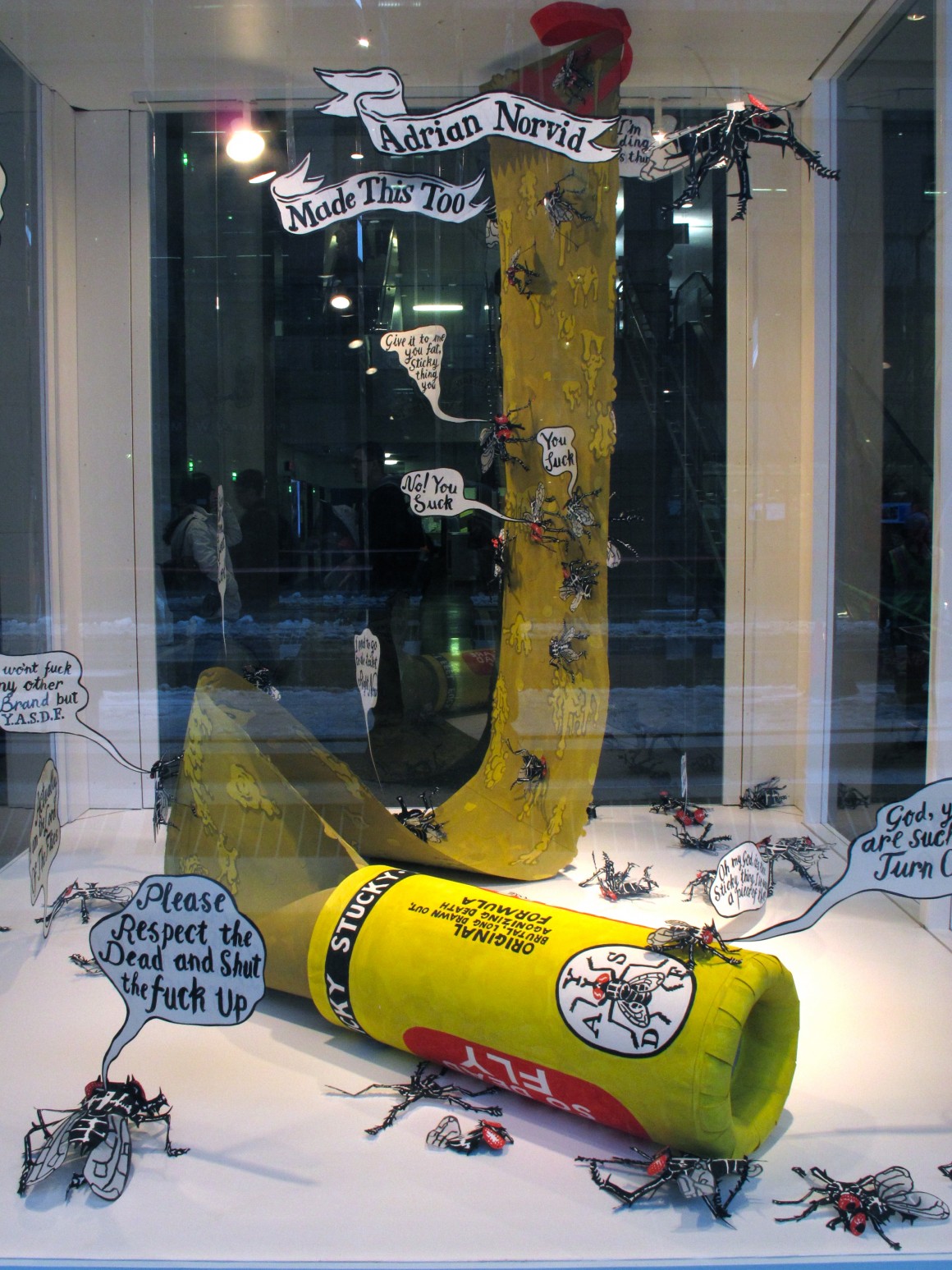 Adrian Norvid, You Are So Dead Fly (detail), 2013. Courtesy of the artist. Photo: Paul Simth 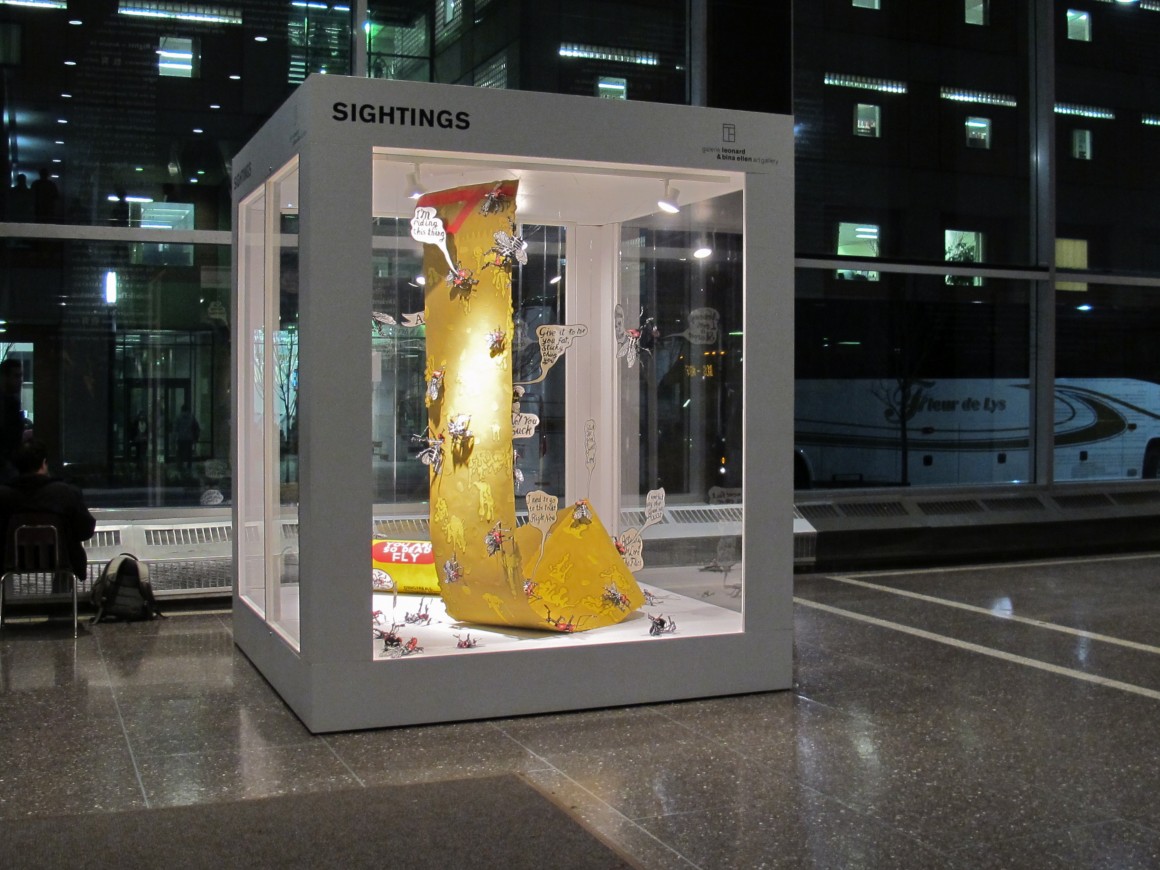 Adrian Norvid, You Are So Dead Fly (detail), 2013. Courtesy of the artist. Photo: Paul Simth

An installation by Adrian Norvid

Adrian Norvid has created the eighth project in the SIGHTINGS series. Norvid’s You Are So Dead Fly is a new installation that highlights his interest in popular culture: it consists of a large-scale reproduction of a strip of flypaper to which insects have become stuck. With comic-strip-style dialogue bubbles, this paper sculpture gives some of the flies a voice, which they use to make humorous statements linked to their captivity, such as “stick me good, sweet lord” and “oh my God, it’s the sticky thing, I so want a piece of that.”

You Are So Dead Fly draws attention in two ways. First, the display structure sets it apart from the crowded environment of the Hall Building and underlines its status as artwork through its museum-like attributes. Second, its mode of presentation, which isolates it in the centre of the structure and lights it theatrically, amplifies its “spectacular” nature by framing an improbable portrayal of the capture and personification of flies – an unexpected scene to find in a common area of Concordia University.

In the context of this project, surprisingly, the two elements become proportional in scale because the display unit seems to have been designed expressly to present the oversized flypaper, and their association evokes the vitrines that protect valuable objects in particular types of exhibition. This occupation of the space creates a gap between the humorous, playful, and satirical representation of an everyday object and its presentation. This gives it a museum-like, institutionalized, and precious quality due to the physical characteristics of the exhibition space, therefore contrasting with the artist’s intentions. The structure acts as a magnifying glass, enlarging its content – both literally, given the play on scale, and conceptually, as it underlines the status of the paper sculpture as an artwork. On the other hand, the presentation of a single work in the cube raises the question of the ideal point of view. In this case the artist has created multiple ideal points of view to encourage the circulation of viewers.

Norvid’s installation, You Are So Dead Fly, underlines the power of the presentation apparatus; a power attributed to the shape, color, texture and lighting of a space. More specifically, the installation emphasizes the effects of displaying a single artwork within a white cube. It inevitably refers to the museum space and its ability to spectacularize and attribute purpose.

Adrian Norvid uses paper in all of its forms to create murals, installations, and performances, often characterized by excess. A devotee of popular culture and art, he turns to illustration to address recurrent themes such as rock music of the 1960s and 1970s, the psychedelic movement, and nineteenth-century English caricatures. His works also bring together visual motifs and verbal expressions – often British – to divert the usual meaning of representations and reveal a new meaning that is generally humorous, playful, and satirical.

Norvid is a lecturer in the Studio Arts Department of Concordia University and an artist. He recently presented his work at The Rooms (St John’s, Newfoundland and Labrador, 2011), the Julia Karnatz Gallery (Cologne, Germany, 2010), the Art Gallery of Windsor (2009), the Musée d’art de Joliette (2007), the AKA Gallery (Saskatoon, 2005), and AXENÉO7 (Gatineau, 2005). He has also participated in numerous events, including the Symposium d’art contemporain de Baie-Saint-Paul (2006), Pop Montréal (2008 and 2009), and the Triennale québécoise presented at the Musée d’art contemporain de Montréal (2008). His artworks were the subject of a book titled Nogoodnicks, published in 2011 by Drawn & Quarterly. Norvid lives and works in Montreal, where he is represented by Joyce Yahouda Gallery.