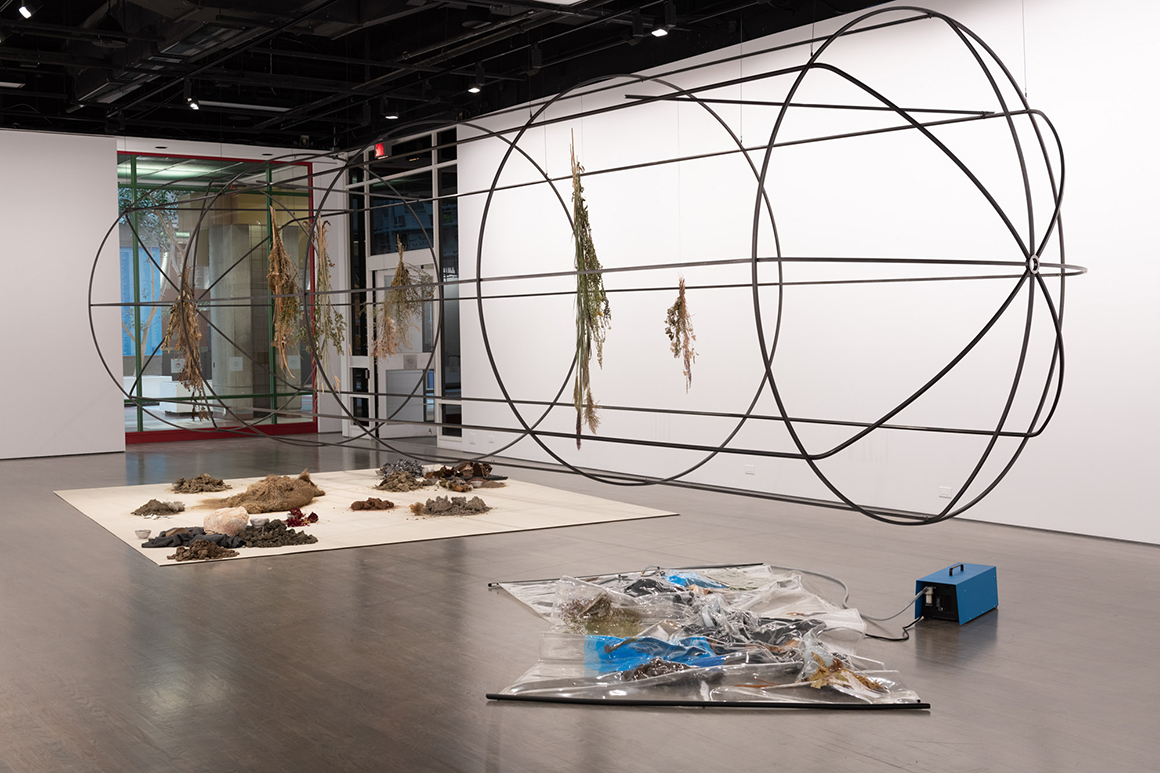 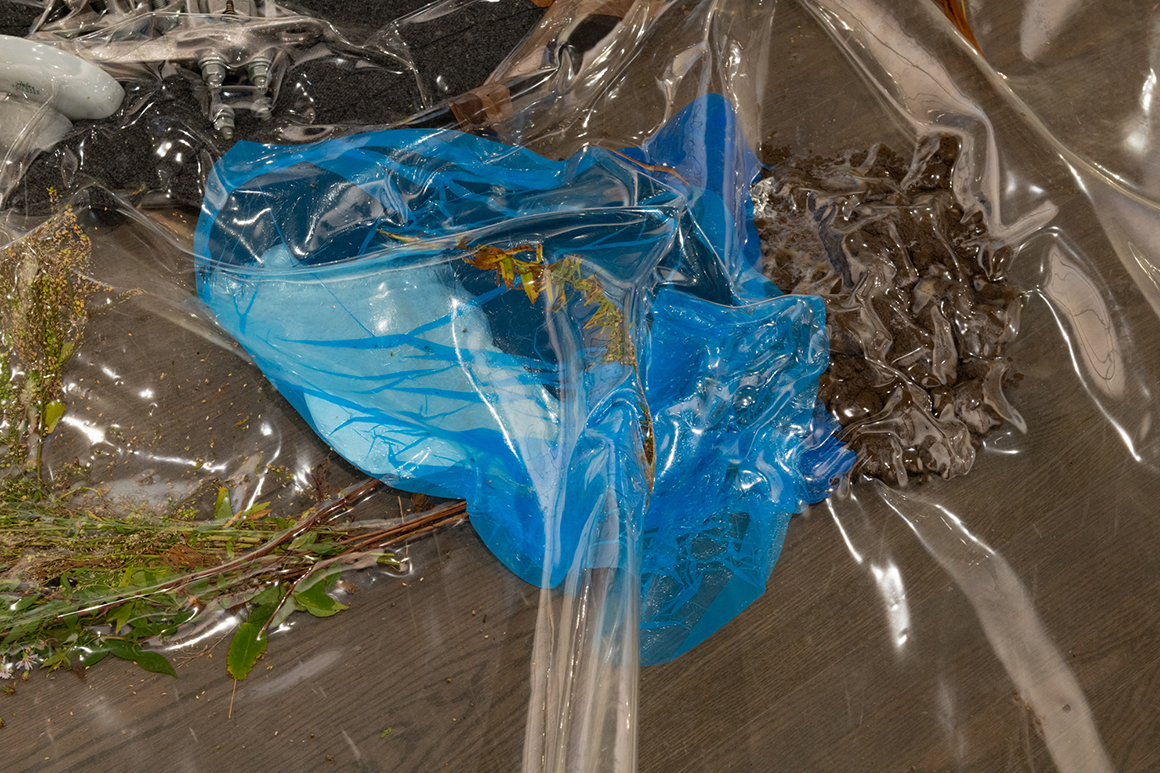 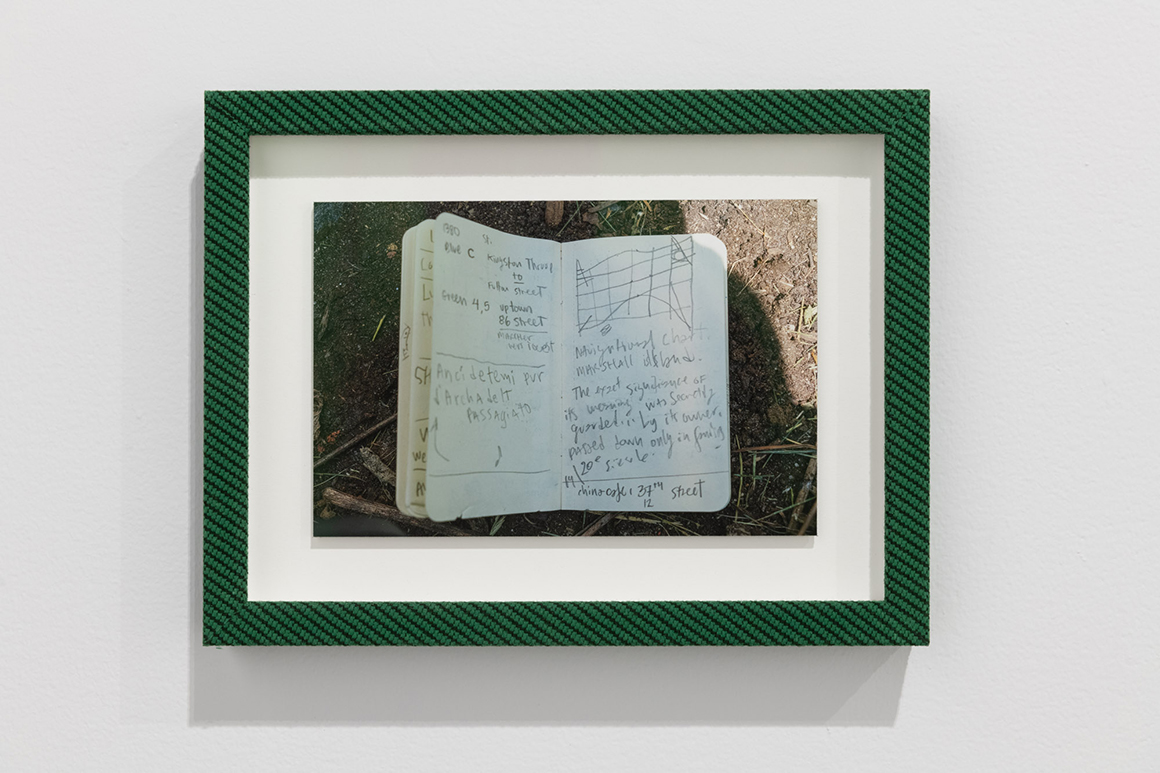 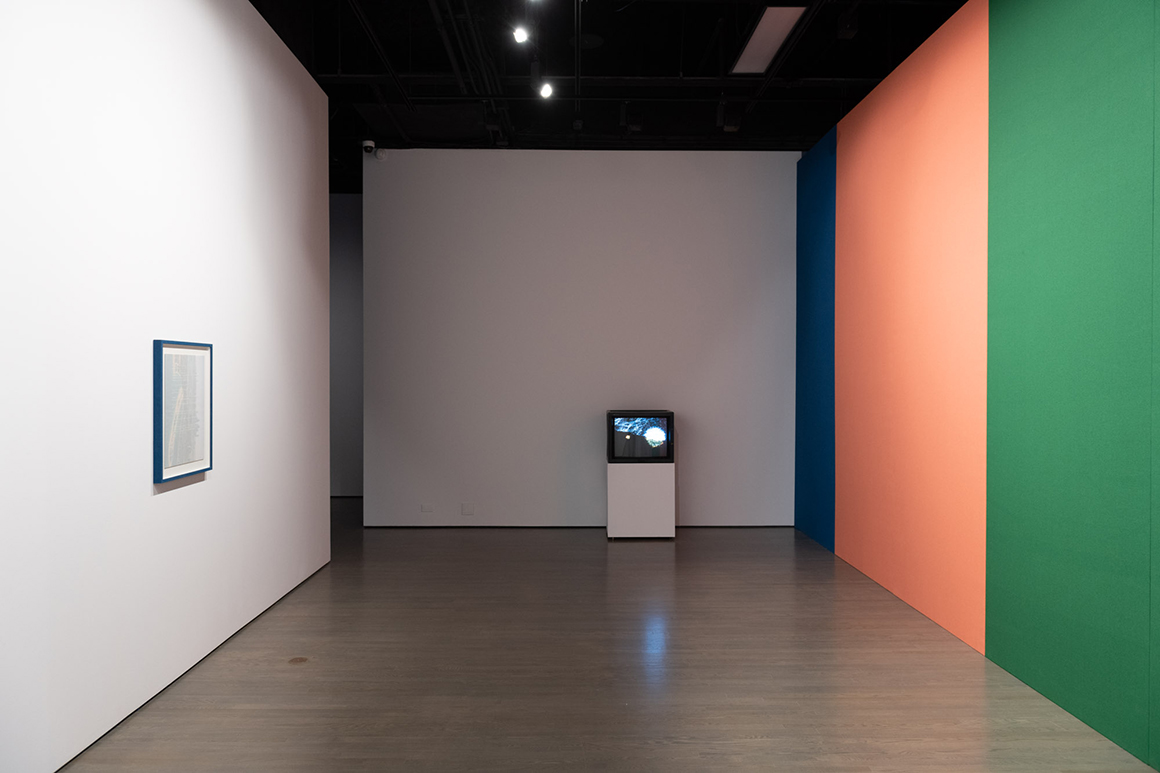 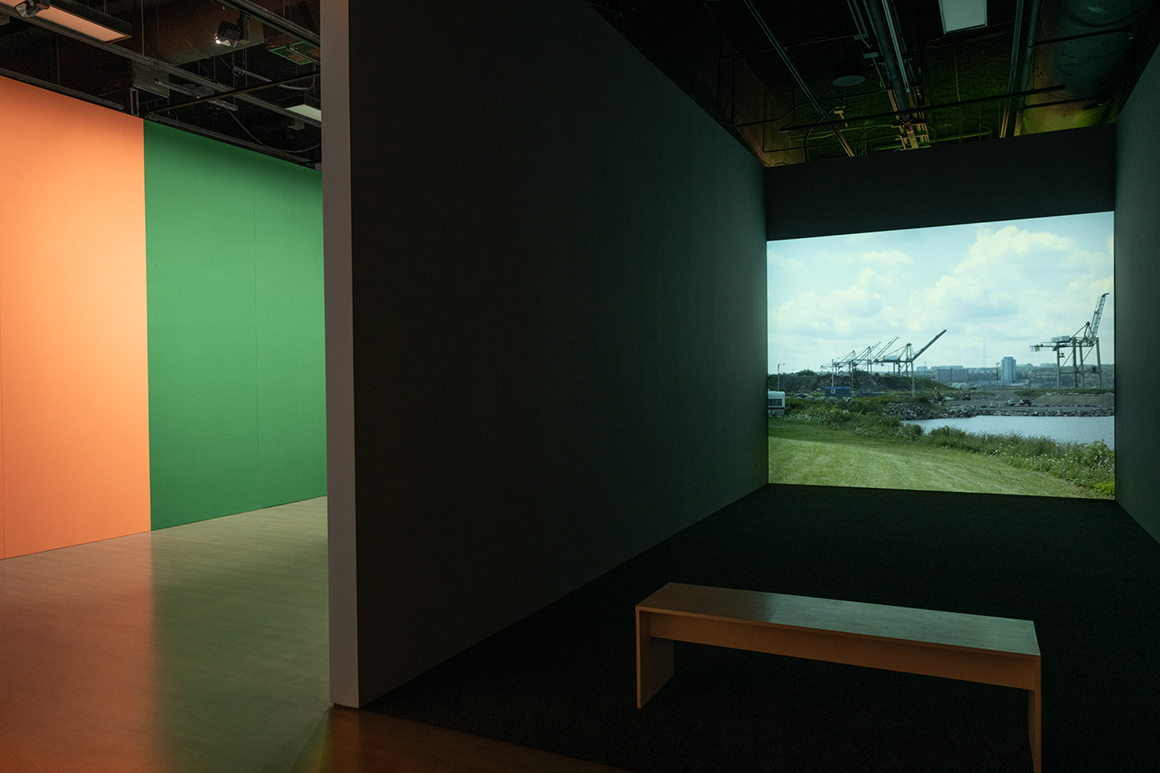 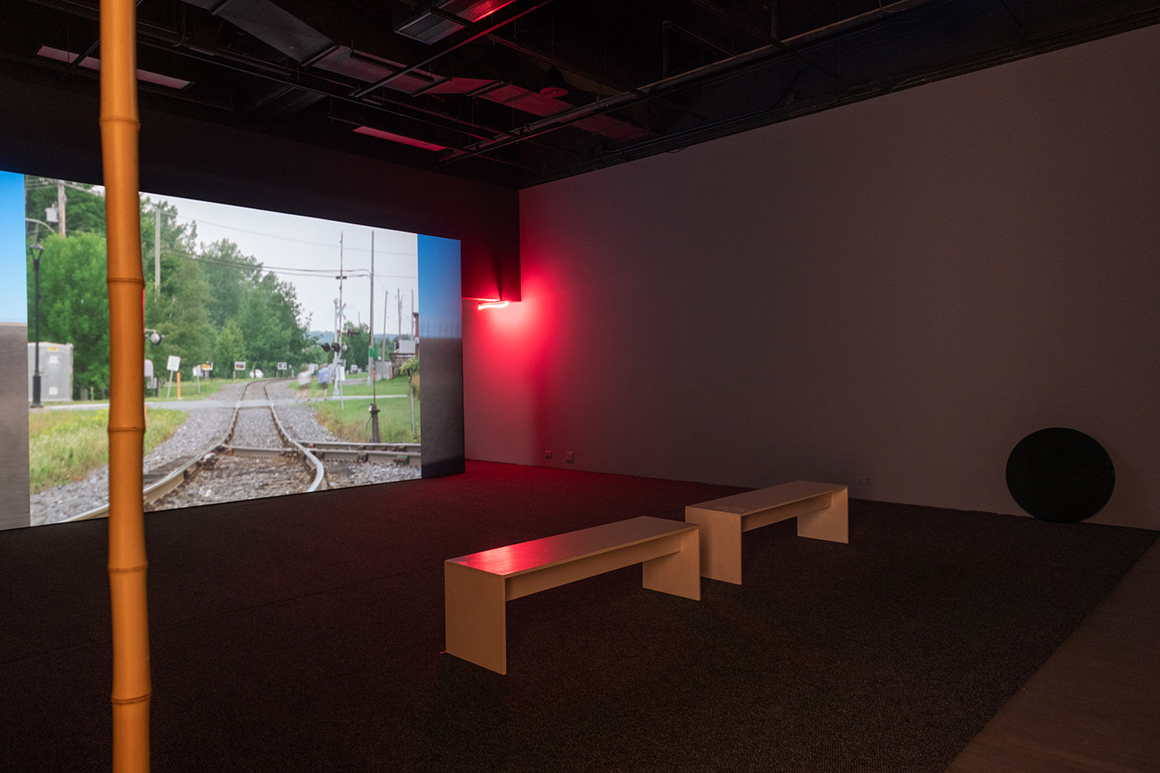 Edith Brunette and François Lemieux’s Going to, Making Do, Passing Just the Same is a multidisciplinary exhibition project hinged on the problem of how to remake our relations with the world under the duress of extractive capitalism, ongoing settler-colonialism and environmental degradation. Shaped by a versatile and collaborative working process, their practice is informed by critical approaches to anthropology, ecology and geography, migration studies, anarchist theory, documentary filmmaking, and activist organizing.

Included here are excerpts from Brunette and Lemieux’s introduction to the project’s accompanying publication, keywords and guiding questions, and the artists’ biographies.

This project was made possible by the support of the Leonard & Bina Ellen Program in Support of Artistic Production.

Artist, writer and researcher, Edith Brunette is interested in the discourses that shape and undo power, as well as political engagement across the spectrum—in particular within the field of art. Cultivating collective forms of practice, her recent projects have notably focused on entrepreneurial ethos, the political agency of artists and the act of speaking out in periods of social crises. Cofounder of the activist organization Journée sans culture, she has co-edited numerous publications at the intersection of art and politics (To Spoil the Party, To Set Our Joy Ablaze, 2017; Le Merle, 2015, 2017), as well as contributed to various magazines and books on art. A doctoral student in political science at the University of Ottawa since 2017, she is the recipient of funding from the Pierre Elliott Trudeau Foundation (2019) and the Social Sciences and Humanities Research Council of Canada’s Joseph-Armand Bombardier Canada Graduate Scholarship (2018). www.edithbrunette.net

Working in a collective and anti-disciplinary manner, François Lemieux makes exhibitions, books, objects and images. His practice pays close attention to the ways of caring for what connects us. Since 2011 he has edited Le Merle — Cahiers sur les mots et les gestes, a publication series combining art, writing and political thought. His artistic collaborations include : Going to, making do, passing just the same (2020); Sur les soins (2020); On ne répond pas à la question — Contre toute attente, on procède; Un Soleil Difficile (2017) and Cuts Make the Country Better (2015). He is co-founder of the Journée sans culture collective and teaches visual arts on an occasional basis.

Residing in What is Coming Undone [exerpts]

Whether we are, indeed, witnessing and participating in the speedy destruction of our living environments can hardly be denied anymore, except perhaps by those lobbyists and naysayers for whom the world—as profit—lies elsewhere.[i] To counter the threat of this catastrophe depleting our political imaginary, we can take hold of it to reinvent how we live and open the way to transformation. But the question remains: where—by what—does one begin grasping a deliquescent world?

In response to such a far-reaching question, we wish to propose a shift in scale, directing attention to what’s below our feet and between our fingers, one step and one handful of earth at a time. Turning to this, the earliest of gestures, allows us to further sharpen the question: how do we inhabit a world made inhospitable? Neither globalist nor individualist, inhabiting brings planetary disaster’s incommensurable politics back to the level of uses—to what is nearest to us yet always in correspondence. The issue here is not to outlive the world’s devastation in an everyone-for-themselves sort of way that leads to even less presence, but rather to experience it. To inhabit is to grasp where we live with our entire bodies, short of any territorial or identitarian claim of possession.

Colonizers and colonized, rich and poor, share, however, a centuries old heritage of being dispossessed of the land, a process that tends to bring all humans into the orbit of capital to ensure their subsistence, and which today makes organized circulation the very condition of their existence.[ii] Life in the space produced by capitalism is timed to the crossing of a continuum made of tangible or intangible systems that, in addition to seizing upon our bodies and imaginations, also orient, arrange, reproduce, maintain or put a stop to goods and people (people as goods)—our passage through these apparatuses permitting the extraction of a value.[iii]

Other ways of keeping to the world are possible which do not rely on the same anchor points offered by extractive structures. Yet searching for these brings up new questions. For instance, how do we set down without resorting to possession? How do we refrain from wandering without enclosing ourselves in what’s familiar and non-threatening? How do we choose who and what will hold us and onto which we’ll hold in turn? In that process, how do we constitute a “we” that is more than our history and our privileges (in the case of the authors of this text, the history and privileges of whiteness)? How do we make our habitats crucibles of political action as well as sources of shared, dangerous becomings, where unexpected attachments might make other ways of living possible? And, for those among us asking these questions through artistic practice: how do we take advantage of an exhibition to bring about a milieu—that is, to create a community—by embracing creation as a gesture of hospitality? Grappling with this last question, we remembered that exhibition-making is, first and foremost, an act that brings together gestures and things for people to gather around.  Already a bit, too, like giving rise to a world.

Translated from the French by Pablo Rodriguez

[i] We would like to thank Suzanne Beth for her careful and generous reading of this text, as well as the authors in this publication whose research has thoroughly informed our thinking.

As the title of Brunette and Lemieux’s project suggests, their work is action oriented. Yet, this isn’t action in the imperative, commanding you as the visitor to move somewhere, to adapt or adjust to one condition or another, or to trespass or cross a line. Rather the artists are oriented to action. They are drawn and attentive to movement already underway and underfoot. They are inclined to potential, yet to be realized acts and experiences.

Through their project Brunette and Lemieux examine the different forces that shape—if not outright police—how we relate to our lived environments, from a planetary whole down to the details of our everyday landscape. Accordingly, orientation applies to intellectual and political commitment as much as it does to navigation and a sense of place.

Orientation is, in effect, a sum of relations. To orient yourself you need to survey your surroundings and decide what is relative to your position. To change your orientation, you have to change how you relate to your context. Inclination too has its spatial and cartographic senses. A compass’ needle dips into an incline when pulled by the earth’s magnetic field. Terrain rises and falls. At question for Brunette and Lemieux is what clouds our orientation, what inserts itself between our political and social inclinations and the most immediate and underlying fact of territory.

Wayfinding. Note how the landscape is framed and navigated by the camera. What ways of looking and details arise from these different viewpoints and techniques?

Circulation. What is the scope of the ship’s route? What traces does capitalist production and exchange leave behind?

Simply turning around, looking elsewhere, scanning the horizon is one step towards reorientation.

But there are other senses to turning. A plow turns soil. Memories and histories can be unearthed and turned up. Turning up as a form of arrival, such as so-called uninvited and unexpected arrivals at the border, shore, or port. Turning up to a protest. Turning up in solidarity. Something thought lost that then turns up. Giving something up and turning it over.

At its etymological root turning leads us to tools and crafting. In Latin tornus refers to both a lathe and a potter’s wheel. In Greek, a carpenter uses a tornous, a compass to trace circles. In French, tournage can be used alternatively to describe shaping material with a lathe, or to a film shoot and the set itself.

Making, as Brunette and Lemieux propose, is not simply shaping a final product. Instead of manufacture and accumulation, it is a question of crafting and transformation. Production then is about asking questions through making. And there are skills to be developed in this process. Principle among them an attentiveness and sensibility to the different ways of corresponding with material. Looking for ways of knowledge acquisition that are not extractive, Brunette and Lemieux favour tentative, frequently tactile and situated, forms of dialogues.

Crafting. In what ways is making presented as a form of intervention, as a means to reshape social and political landscapes?

Buildup and residue. What activity lies behind the shaping of an artificial mountain? How does the half-life of nuclear waste bear on our expectations for environmental repair?

Capital depends on the unimpeded circulation of commodities. Consider the movement of crude oil, the world’s number one commodity. When the construction or expansion of pipelines is delayed, companies move oil onto the rails. Piped into uniform tanks and linked into trains, these surrogate pipelines snake across thousands of kilometers to arrive at refineries and ports, only to be processed and circulated again.

Suspended from the ceiling in the main gallery is a framework modeled after these rail tanks. A typological study of an industrial form, it also serves as a place to hang dry foliage collected by the artists. Gathered while shooting the video Going to, Making do, Passing Just the Same as seen in the neighbouring gallery, the plants add up to a botanical archive of Brunette and Lemieux’s routes. And looking up at the leaves, roots and petals, you could say they represent a field. This is the field—the plant life and organic environs—to the artists’ fieldwork.

In anthropology, fieldwork is understood as a method of embedded and experiential observation. Time- and space-based, it is the investigative groundwork towards studying the ways people live in relation with their everyday context, cultural practices and environment. In sociology, a field is understood as the rules, hierarchies and values that shape social milieus. Fields are studied for their power dynamics, the positions granted to or taken up by its participants.

Informed by these research techniques, Brunette and Lemieux map out a complex array of overlapping fields. In each case, they return to the question of territory, the planetary fact, the common ground that links all these fields regardless of their orientation.

Survey the fields. Who are some of the protagonists in the works? What roles, communities or networks can you identify? How do they overlap? Who remains obscure?

Compare the videos. How do the different approaches to narrative and documentary shape your reception of the content? Does the presence or question of territory lead them to take other forms?