This fall, the Gallery launches a multi-year cycle focusing on the theme SEE FEVER. The expression refers to a fervent desire to “see everything,” the lure of strategies that aim to see “more” or “further,” and to contexts that widen our field of vision or destabilize our perceptual mechanisms. Reflecting this theme, the SIGHTINGS cube is envisaged as a raised observation platform whose four transparent walls provide a 360-degree view. Projects will examine the viewing subject’s perceptual and psychic experience when presented with a wide-angle perspective, the search for the panoramic view and the horizon, and the optical apparatuses and technologies that permit the augmentation, enhancement, and disorientation of vision’s spatial logic. 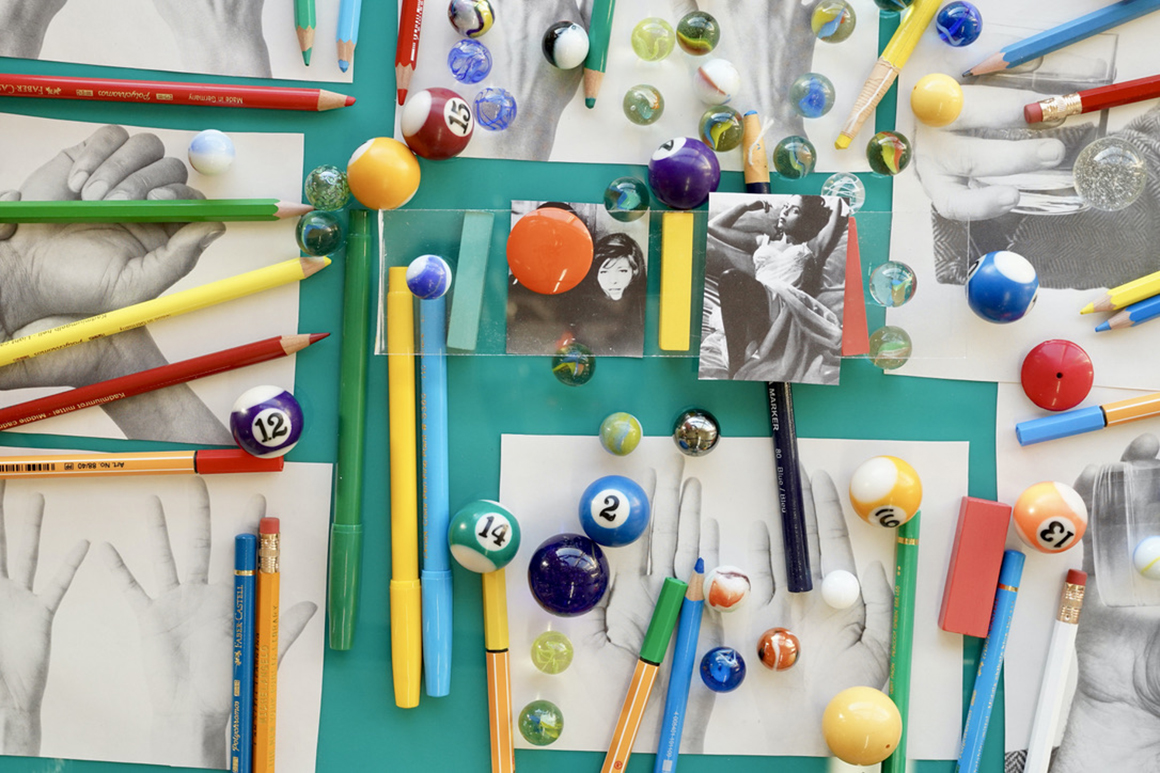 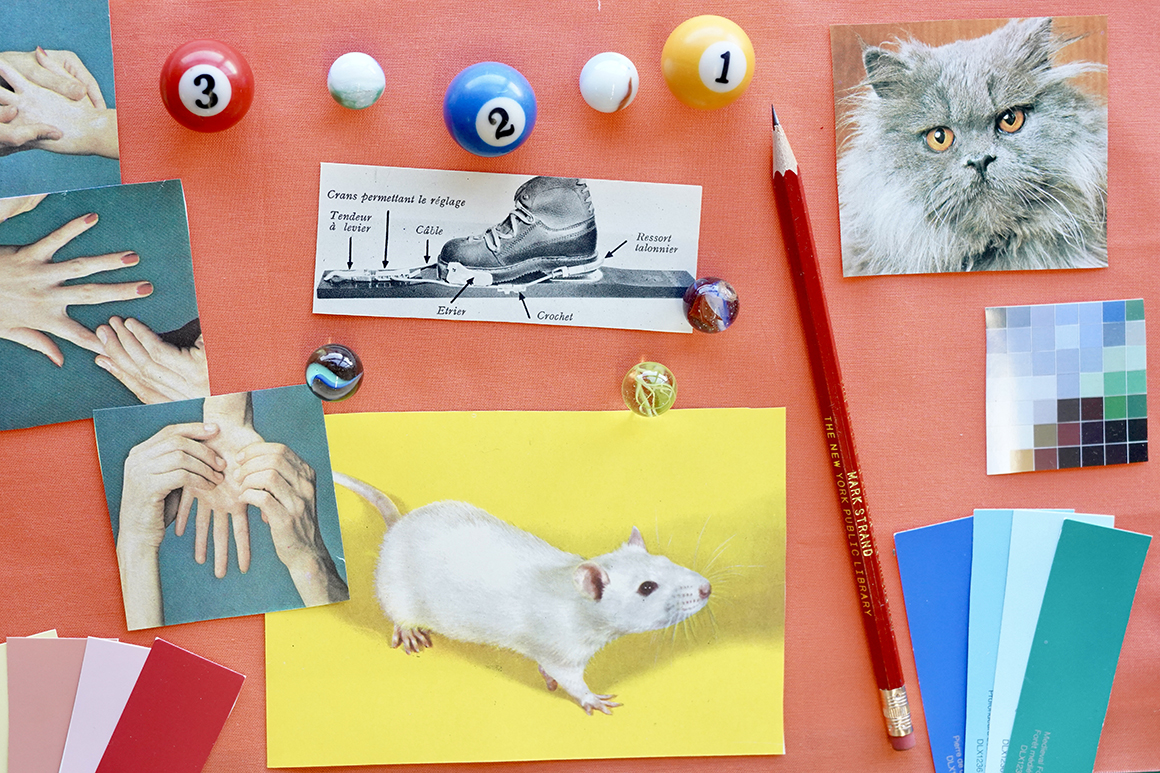 A project by Kim Kielhofner

Kim Kielhofner works in video, drawing, and collage. She is interested in how we understand narratives and how we place ourselves into them. Her work has been presented at Dazibao (Montréal, CA), LUX (London, UK), VOX (Montréal, CA), Kassel Dokfest, WRO Biennale, and Oberhausen International Short Film Festival.

7. “For More Than a Decade, No One Knew Where It Was”
(Adrian Nathan West)
8. “He Took the Shape of a Bowl in Order to Eat Out of It”
(Toby MacLennan)
9. Dimanche

A correspondence between Julia Eilers Smith and Kim Kielhofner

J: I’ve been thinking about panoramas—these large, 360-degree paintings which became popular attractions in the 19th century. I’ve been intrigued by their development as optical devices and their impact in shaping a new experience of looking at our surroundings (land and landscapes, in particular). I find that there is a “panoramic” quality to your work. In its breadth, first of all: you collect innumerable images that span centuries and subjects/genres from history and literature to popular culture and cinema. But also in its immersive nature, and in how you stage the gaze: gazer and subject of the gaze are blurred. While the panorama can be seen as a formof mass medium of the time, your work on the other hand feeds into mass visual culture, and reflects on our experience of these visual materials, how we rely upon them and how they shape our vision in return.

K: This has got me thinking about a complete revolution, a 360. I recall the example of Louis Althusser on “interpellation” where a police officer calls out “Hey you there!” Upon hearing this exclamation, an individual turns around, and “by this mere one-hundred-and-eighty-degree physical conversion, he becomes a subject.[1]” I wondered, using this example, what a 360-degree turn would yield.

I remember reading a passage, and I’m not sure where, but it was a description of a character both exiting herself and achieving an understanding of herself. The process was a swirling back, through a series of small objects in her life. It was not linear, and jumped in time. The objects in this process had their apparatuses revealed and were re-assigned functions. Similarly it makes me think of a passage in a book by Clarice Lispector, whose protagonist, grasping for some kind of understanding, finds herself looking around a room and finding herself in relation to the objects that surround her. The way she found of taking possession of herself was by bringingthese objects into language, a kind of extension, delimitation, and dissolution of the boundaries of her subjectivity. In these examples, I see the idea of circling in the process of becoming and un-becoming a subject.

In The Space of Literature, Maurice Blanchot writes:

[…] interior space ‘translates things.’ It makes them pass from one language to another, from the foreign, exterior language into a language which is altogether interior and which is even the interior of language, where language names in silence and by silence, and makes of the name a silent reality. ‘Space (which) exceeds us and translates things’ is thus the transfigurer, the translator par excellence.[2]

I can see the complete 360 rotation as a creative act. Maybe it is also a “space that exceeds us.”

J: In the physical motion of circling, in the turning over and over again, there is repetition, a form of revisiting, an emphasis or insistence. I think of what is lost and accrued in the circular motion. It’s different to think about a single 180-degree rotation, or a single 360-rotation (as you’ve referred to). These evoke more of a change of direction and imply a state of alertness. Like a “turning point,” which involves a transformation, a reversal of some kind. Reading your notes about the 360-degree rotation, and the annihilation of subjectivity or the process of exiting oneself, I’m reminded of Dara Birnbaum’s Technology/Transformation: Wonder Woman, 1978-79, in which Diana Prince’s spin metamorphosis, from civilian to heroine, plays in loop. Most superheroes metamorphosize through spinning, as if the spinning distorted the space-time continuum (perhaps, as you say, creating a space that exceeds us?). In her work, Birnbaum highlights the spectacular effect of this metamorphosis, suggesting it does not so much rely on the characters’ will or agency, but is targeted for the TV audience or industry.

K: Dara Birnbaum’s Technology/Transformation: Wonder Woman is a great example of the kind of transformation/rotation/revolution I’ve been thinking about. The repetition of the motion—the spinning—that gesture is closer to the kind of exiting oneself that I have been reflecting on.

J: I wanted to touch on the role of gestures in your work, and how they serve as methods of investigation. Body language and hand gestures are structural in your videos. There’s a kinetic energy that comes out of them. Hands are actively staging scenes and guide us through the narrator’s meandering train of thought. They give it direction.

K: When I’m editing, I often choose a moment of movement or else a moment where the camera’s presence is felt. It’s important to me that there is a kind of guide through the work. That is, the sense of being on a guided tour but not instructed—that the viewer has the agency to make their own associations.

J: When I was researching on the history of panoramas, I remember reading that they eventually became a medium of instruction on how to see. They offered a new experience of seeing or looking: a different perspective, an unobstructed round-about view where one can take in the whole. Panoramas became a site of observation where one could return to exercise or practice this new sensibility. But panoramic views were still arranged views, an organized display.

K: Exercising or practicing is key to this project—specifically the repetition of the arrangement of objects and images into visual experiences. The objects I am using are common and easily discarded, but here they are being used beyond their intended function. Similarly, the images I am arranging are taken from encyclopedias, instruction manuals, beauty guides, catalogs— print forms that are considered obsolete in some way. It is also an exercise for me, a kind of turning back and reviewing of my own process. I’ve identified a few elements I’ve found myself returning to, or maybe spinning around, over many years. The collected stories gathered here have been building behind my other projects. For others, the fragments, there was a connection that I wasn’t able to fully explore. Hotel Atlas: Collected Stories and Fragments is a portal into all of this.

Kim Kielhofner works in video, drawing, and collage. She is interested in how we understand narratives and how we place ourselves into them. Her work has been presented at Dazibao (Montréal, CA), LUX (London, UK), VOX (Montréal, CA), Kassel Dokfest, WRO Biennale, and Oberhausen International Short Film Festival.